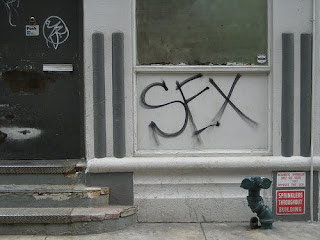 We had beautiful weather yesterday. I went walking in the East Village in the morning and had a cup of coffee in Tompkins Square Park, under a sunny clear sky. I watched the locals watch their dogs romping in the dog run -- dogs are so funny, exploding with enthusiasm when, after being cooped up in an apartment, they’re released into the company of other canines. No matter the breed, they go right back to their wild dog roots, racing around and barking and humping and getting into little skirmishes.

I came home and cleaned out my CD collection in the afternoon, burning parts of them onto iTunes and hauling the carcasses to the Housing Works Thrift Store. That condensed my music collection into songs I actually like, rather than songs I have to tolerate to get to the ones I like. Now I have to back everything up, but I have lots of nice blank space along that wall.

Last night I went to a “bachelor party” for two gay friends who plan to get married -- ceremonially, if not legally. (They’re doing it here in New York, where legal is still not an option.) Alas, I had to leave before the stripper got there.