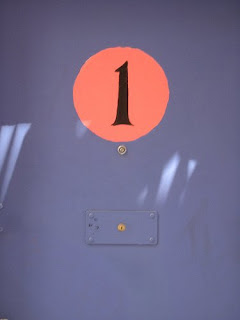 When I lived in Morocco 15 years ago, I picked up silver Berber men’s rings at markets and souks whenever I found one I liked. They were inexpensive -- the equivalent of $5 or so -- and all handmade. I had a collection of about ten of them, and I used to wear two favorites pretty much every day.

Back in the states, after a few years, I switched to a silver bracelet (also Moroccan) and put the rings away. I haven’t worn them now for about 8 years. I put four of them in a shadowbox in my hallway with some other small tchotchkes, and sold the rest to a Moroccan crafts store on Ninth Avenue.

Over the weekend, I got out my two old favorites again, and I wore them Monday and yesterday. But it’s funny -- over the years my hands have become used to being ring-free, and they rebelled! Those rings really bothered me. I was aware of them all the time, how they felt, and wanted to take them off at every opportunity. Last night, I put them back in the shadowbox.

I may wear them from time to time, but it’s funny how my body has changed, and my awareness. I’m sure I’d eventually get used to them again, but now I’m even less of a jewelry-wearer than I ever was -- so maybe the shadowbox is where they belong!