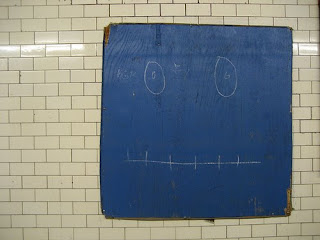 Whew! I finished painting yesterday afternoon, and the place looks great. My right hand is incredibly sore from holding the roller, but otherwise I seem to have come through unscathed.

While painting, I had an interesting encounter with one of my neighbors. He was out in has back yard, which is just below my window, about 7:30 a.m. on Saturday, singing operatically at the top of his lungs. People shouted at him from the surrounding windows to pipe down, but he ignored them, and sang off and on all day. He was singing again Sunday (”The Impossible Dream,” I think in Spanish) although he started at a later hour.

Finally, Sunday afternoon, I called down to him as he stood in his backyard and asked him nicely to please not sing so loud. He took great offense, telling me that I should ask the birds and trucks to be quiet too, and calling me all sorts of unprintable names. I told him if he kept it up I’d call the cops.

Interestingly, he did stop singing. But yesterday he marched around his yard in a rant, yelling obscenities for at least half an hour. I think he was ranting at being asked to stop singing, though I’m not entirely sure. I filed a noise complaint with the city.

Clearly this guy is not balanced. I’ve seen him on the street and to say he is eccentric would be an understatement. I recognize the need for compassion in such situations, but at the same time, his behavior is unfair to everyone else. And I want him on the police radar.

Am I being unreasonable?