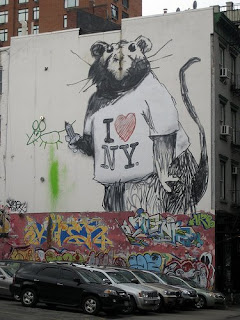 This huge mural by the British artist Banksy just went up in SoHo, at the corner of Wooster and Grand. Turns out that Banksy himself didn't paint the side of the building, but instead contracted with a sign-painting company to do it. That's prompted a lot of spirited debate among my Flickr friends about the nature of art, specifically street art, and especially Banksy's work.

Some people think Banksy is the ultimate sell-out for commercializing his name and "brand" on ventures like this. But the way I look at it, virtually any street art could be called self-promotion, and artists have a long history of employing assistants to help with pieces. I don't see anything wrong with Banksy having professional painters put up a huge piece that he designed but wouldn't be able to execute on his own. (Particularly given his famously secretive persona.)
Posted by Steve Reed at 12:04 PM