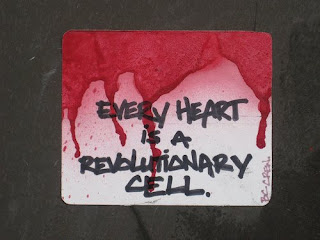 This is GLBT Pride Weekend in New York, with the parade on Sunday and various other events here and there. Last night was my company’s annual Pride Party. We began in the party room of a swanky apartment tower right next to the Flatiron Building, and wound up later that night at Stonewall, the location of the fabled Stonewall riots in 1969.

This is the 40th anniversary of the riots, which are often held to be the single most significant event launching the modern gay rights movement. There were gay organizations and actions before Stonewall, but the riots were certainly the moment the gays changed their strategy to fighting back rather than working from within.

The physical building hasn’t been a bar continuously since 1969. It apparently went through a period when it was a Chinese restaurant, and maybe a bagel place, according to my coworkers. I know it was a bar again by the time I visited New York in 1997, because I went there with a friend -- and I think that was the last time I was there, before last night!

Anyway, the party was fun, and I do plan to go see the parade on Sunday, if the weather cooperates. Happy Pride, everybody!

Same to you, Steve. Have a great weekend.

Happy pride to you, too!

We've come a long way in this country, although in some parts of the country you'd never know it.

My best to you, Steve.

i love the sticker art

Happy Pride, Steve!
Hope you and yours had a great weekend

The Stonewall is one of those places that gave me comfort to know it was in operation, but I've only entered 2-3 times. It was a bar when I lived in New York in the late '80s through the early '90s.