KFC on the Floor 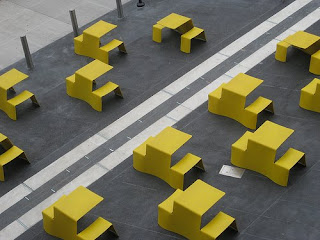 Dave got back from Michigan last night. The poor guy had quite a day -- driving across the northeast, getting the key to his new apartment and moving in some stuff, then driving into the city to retrieve his dogs and his troublesome boyfriend.

Since his furniture hasn't arrived yet, we had dinner last night on the beige-carpeted floor of his very beige new place. We got Kentucky Fried Chicken (though we both got the grilled version) -- a very beige meal, come to think of it. I tried to liven things up with some wine and a candle, and his mom had given him a homemade apple pie, so we had a tasty dessert. We ate it straight from the pan with our sporks.

I caught the 11:30 train back into the city last night. It actually took about an hour -- more time than I expected, but as some of my commenters have pointed out, still not a bad commute.

I'm trying to be cheerful about his move, but honestly, I'm kind of depressed about it. I know it's not that far away, but the area where he's living is such a different world. It seems very far.

Oh well. One way or another, we'll adjust, right?

(Photo: Chairs in an outdoor plaza seen from above, Meatpacking District, June 2009)
Posted by Steve Reed at 12:46 PM