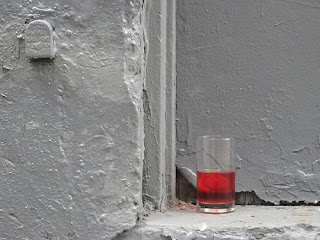 Whew! What a weekend! Dave has a friend in town from Michigan, so we've been out on the town a bit.

We met up Friday at a bar in SoHo (I got out of work early, yay!) and had a few drinks. Apparently this bar, Onieals, is on the "Sex and the City" tour circuit, because a busload of women in little flowered summery dresses and sandals descended on the place while we were there and slurped up a raft of cosmopolitans. Kind of amusing to watch. (I don't know my "Sex and the City" lore, but the Onieals website explains the connection.)

We then resolved to have "cheap American food" for dinner, so what did we do? We went to Jean-Georges Vongerichten's restaurant in the Meatpacking District, Spice Market. Not particularly cheap, not American. What can I say -- we were being spontaneous! I had char-grilled chicken with kumquat lemongrass dressing -- you know how I feel about kumquats.

Yesterday we compensated for our extravagance by cooking at Dave's friend Stephanie's apartment. This was after Stephanie and the visiting friend, Kellee, spent FOUR HOURS and about $275 apiece getting their hair done at a salon. (I am SO GLAD I don't have hair! Gotta say, though, it looked great by the time they were through.)

I did get some quiet time yesterday -- I took a nap in the afternoon and went to the gym. This morning I may or may not do the Zendo. I need to clean the apartment, and this gray rainy weather doesn't make me want to go outside at all.

(Photo: A stray drink in a doorway on Thompson Street, SoHo.)
Posted by Steve Reed at 1:13 PM