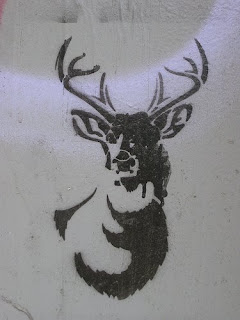 Did you ever see a movie where a character was compelled by an outside force to do something catastrophic? The example that comes to mind is the famous scene at the beginning of “The Omen,” where Damien’s nanny hangs herself under his Satanic spell.

Well, I just had a somewhat similar dream. I was doing photography at night, and walking near a prison, or some other highly secure facility surrounded by razor wire. I saw a pattern of clouds over the roof that I wanted to photograph, and I ran toward the fence and began climbing it, in order to leap over and get a better picture from the prison yard. Even as I was doing it I realized it was crazy, but I felt powerless -- I was being compelled to jump that fence. I went over the top and snagged my clothing on the razor wire, which meant I couldn’t quite jump free. I woke up just before I got sliced to ribbons.

Control issues, anyone? I mean, sheesh!

It’s true that there have been a lot of forces working against my routines lately, some of them good and some of them not. (The negatives are largely related to work.) This dream tells me I’m still a bit conflicted about moving away from my orderly, self-determined existence to one where I’m doing lots of new things and, well, growing. I’m also conflicted about my own distracting compulsions and resistances (to practice and sitting, for example).

Dreams are so funny!