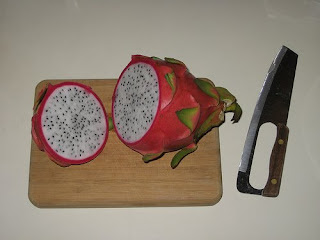 Yesterday was a marathon of activity! In the morning, I met my family at their hotel in the financial district, and we walked down Wall Street and through Chinatown, the Lower East Side and the East Village. In Chinatown I bought a beautiful fruit called a Dragonfruit (above) -- I’d never seen one before. Sweet and slightly tangy, it looked better than it tasted.

We had lunch at Katz’s Deli and then came up to my apartment, where we relaxed with the cat for a bit before heading off to the American Museum of Natural History. We saw the blue whale and the dinosaurs, and went to the space show at the planetarium. Then we had dinner and went all the way back downtown to their hotel. 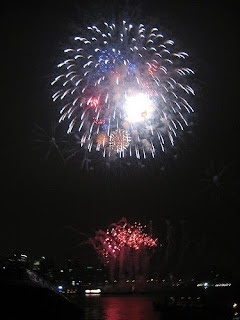 That’s when the real fiasco began! We’d been ambivalent about trying to go see the fireworks on the East River, because it’s such a mob scene. But their hotel was nearby, so we decided to brave the hordes. Problem is, the police narrowly restrict where you can watch the activities -- many streets are closed off, so thousands of people wind up being funneled through very small openings onto the closed FDR Drive, which is elevated and runs along the river. We were backed up on the sidewalk for about half an hour, scarcely able to move, before we inched our way up and finally got through the bottleneck onto the FDR.

Why we can’t just walk over to the river unimpeded is beyond me. But I digress. 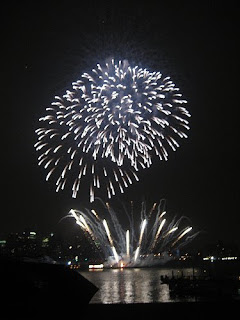 By this time, my nephew was grumpy and it was beginning to rain. Then the fireworks began and he immediately put his fingers in his ears, closed his eyes and said “PLEASE LET IT BE OVER.” That’s when my stepmother explained that he doesn’t like loud noises! (He has Asperger’s, so he has some special sensitivities.) I thought, “Well, why are we even here? This was a really bad idea!” We watched for a bit but the kid was so clearly not enjoying it that we got out of there pretty quickly.

As quickly as we could, anyway, given the five zillion people around us and the strange police notions of crowd control. And you should have seen the subway home. Whew!

If I ever decide to try that again, talk me out of it.

Here, for your crowd-free benefit, is a video of a completely random portion of the show. Enjoy!