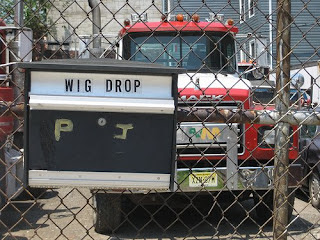 My family is still in town. Yesterday we went up to the Bronx to see Yankee Stadium at my nephew's request. He loves sports and has an amazing memory for statistics and players -- we saw a mural featuring famous players from the past and he could name them all, even though they weren't labeled. I was impressed! He enjoyed just walking around the outside of the current stadium and seeing the new one being built next door.

Then my stepmother and I went to see "In the Heights," which is a terrific Broadway show. It won the Tony for best musical, and I can certainly understand why. It was moving and the music was terrific. We had a ball.

(Photo: Mysterious box on a trucking company fence in Red Hook, Brooklyn, June 2008)
Posted by Steve Reed at 11:22 AM