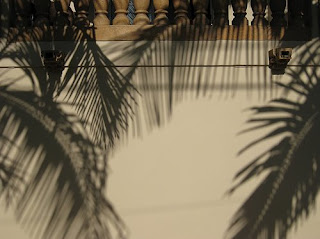 I can see why California earned a sort of mythical status among Americans back in the middle of the last century, when our culture was centered more or less on the snowy, gray, industrial northeast and midwest. It can be really beautiful out there. This weekend was unbelievable -- sunny but cool, jacarandas blooming in clouds of purple, jasmine scenting the air. It was like a pop song, “California Dreamin’,” maybe.

My friends Christopher and Gerardo live near West Hollywood, right between Santa Monica and Sunset boulevards -- a green oasis of a neighborhood. They just got a new apartment, and their balcony has a view of downtown Hollywood, the Hollywood sign up in the hills, and downtown L.A. in the distance. Pretty swank!

On Saturday we went to Venice Beach and walked around a bit. It’s always a lively spot, with its beachfront tattoo emporiums and cafes. On Sunday we went to LACMA, the art museum, and saw its exhibit on Pompeii, which included some really stunning pieces of Roman art. We took in a couple of excellent movies, “Star Trek” and “Outrage,” and went to dinner one night with some of their friends.

I also did some exploring in their neighborhood, shooting small pieces of street art and grabbing coffee at The Coffee Bean on Sunset. I went running Sunday morning along the Hollywood Walk of Fame, which I always like to do when I’m out there -- if you go early enough, there are no people around, and being reminded of all the entertainment greats of the past diverts you from thinking about how tired your legs are!