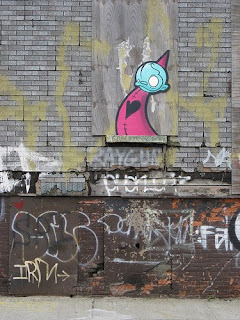 I’ve been purging my online life a little bit in past days. I deleted my account on LinkedIn, for example, because now that I have Facebook (which is a lot more fun) I don’t really see the need for it. I hadn’t logged in there in months.

I also deleted my Twitter account. I know, I know -- I just wrote about making an effort to Twitter. But that effort lasted exactly one day. Twittering is just not in my blood, nor is reading other people’s Tweets.

I took down my Chemistry.com profile, because now that I’ve met Dave and we’re seeing each other pretty steadily, I don’t want to be bombarded by e-mails about so-and-so wanting to meet me and why haven’t I responded. I’m no playa!

I had a great day yesterday. Gym in the morning, and then a quick trip out to Bushwick, Brooklyn, to do some street art photography. I found lots of new stuff, including the above piece by Bishop203 -- I actually ran into the artist just after he put it up. Pretty funny!

Then I came back into Manhattan and met up with Dave. We spent the evening cooking with Dave’s friend and former student, Stephanie. (More risotto -- chicken this time.) We looked through scrapbooks and photo albums that Stephanie compiled from her high school years. It was actually a lot of fun, even though I don’t know any of the people in the photos -- it gave me a window onto Dave’s career and his interaction with his music students. (Stephanie is the rare example of a student who becomes a friend in adulthood.)
Posted by Steve Reed at 12:39 PM