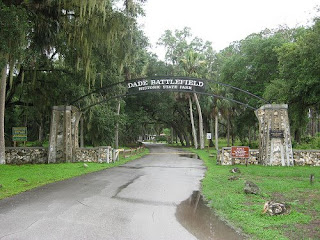 When I was in Florida, my mom and I went to the new Tampa Bay History Center, which covers the history of Tampa back to the period before white explorers arrived and began clashing with the native Indians. The modern city got its start in the Seminole Indian wars, when Fort Brooke -- which later became Tampa -- was part of the supply line for troops throughout the state.

I know very little about the Seminole conflicts, except that they were essentially genocide on the federal government's part. The streets in downtown Tampa are named for Indian fighters and political leaders of that time, providing lingering reminders -- and probably bad karma -- from those conflicts. At the museum, mention was made of the Dade Massacre, which resulted in the death of nearly 110 soldiers under Major Francis L. Dade at the hands of the Indians in what is now Sumter County. (Near subsequently-named Dade City, but nowhere near more populous Dade County.) 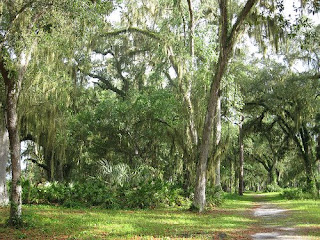 Coincidentally, the Dade Battlefield -- now a state historic site -- is just off the highway we planned to take a few days later to visit my brother in Jacksonville. So Mom and I decided to stop by the battlefield and check it out. I grew up very close to there, but had never visited. 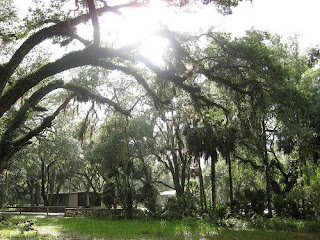 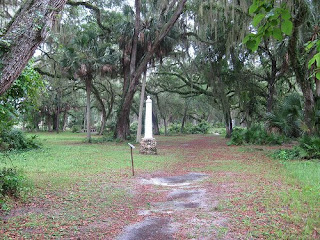 Unfortunately, as we approached the area, it was POURING rain. Sheets of water were falling on the windshield and I could barely see to drive. We thought we’d have to cancel our plans. But then the rain suddenly stopped -- as summer rainstorms do in Florida -- and we emerged from the car at the battlefield and walked around a bit.

The rain gave everything a silvery sheen. The woods were humming with bird-sized mosquitoes. It was fascinating, though kind of dark and eerie, too. We were the only people there. 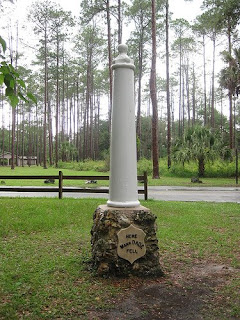 This column allegedly marks the spot where Dade himself fell and died. (I wonder how they know that?)
Posted by Steve Reed at 12:08 PM