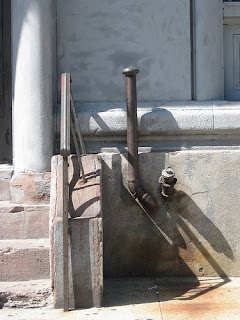 I read an article yesterday about researchers who plan to visit a deserted speck of an island in the Pacific to search for DNA remnants of Amelia Earhart.

It made me wonder at the appeal of the Earhart mystery. She disappeared with her navigator on July 2, 1937, ten days before my mother was born. Now, more than 70 years later, we’re still looking for her. What other missing-persons case has been so enduring?

Part of the allure probably has to do with the South Pacific, a vast expanse of tiny coral atolls amid endless miles of water. We all get a little giddy thinking about that part of the world, with Polynesian beauties a la Gaugin and swaying coconut palms. But to Earhart and navigator Fred Noonan – had they successfully crash-landed somewhere – it would hardly have been a vacation paradise. Probably more like a recipe for starvation.

Earhart herself is a pretty interesting character -- an early feminist icon. While other missing persons of more recent vintage, like Jimmy Hoffa or D.B. Cooper, also captivate the public imagination, they’re tainted by a whiff of crime or scandal. Earhart has none of that baggage. She was a heroic woman who failed at a heroic task.

Now a group of researchers are going to Nikumaroro Island, once known as Gardner Island, to look for Earhart’s DNA. This despite the fact that Earhart is thought by some to have crashed nearer an entirely different uninhabited atoll, Howland Island, hundreds of miles away.

I'd love to see them succeed. But then we'd be deprived of a good mystery that's occupied us for decades -- and we do love a good mystery, don't we?

Actually, I hope they don't succeed. If you recall my LJ post about Everett Ruess, you'll know that I really believe some things should remain mysteries forever.

I think it's the fact that she was a woman, so young and brave, and the fact that flight was still such a brand new experience, that makes her disappearance so alluring. Love that word, btw.

I wonder if they'll find out what happened?

I love the intrigue of things lost at sea -- Atlantis, Amelia Earhart. Let them look. I doubt we'll ever know for sure.

We love a good mystery. I think Reya nailed the reason for our fascination.