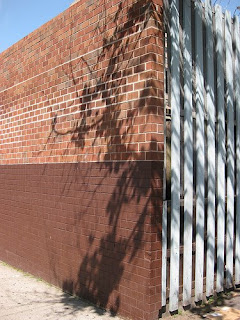 Dave and I went out last night for the latter half of his birthday gift. Because he’s a chef in the French tradition, I promised him a meal at La Grenouille, a famous French restaurant in Midtown with rich red velvet banquettes, masses of flowers and really amazing food. I had bass with artichokes, fava beans and a fennel puree, a salad with sweet heirloom tomatoes and a towering chocolate souffle. Dave had foie gras with seared peaches, lobster and monkfish with sweet peas and a Grand Marnier souffle. Incroyable!

We began the evening with a drink at Top of the Tower, my secret rooftop bar at the Beekman Tower Hotel. No one knows about this place, but it has an incredible view of Midtown and the East River, and it’s much less expensive than many other scenic rooftop bars. (A hint for any frequent New York travelers out there!)

And we ended the night with a walk to the scenic little pocket park at the east end of 57th Street, overlooking the Queensboro Bridge. It’s one of my favorite romantic spots in the city. We sat on a bench and looked out over the East River and the bridge, and talked about our future -- happily, we both seem to be on the same page about that.

I hate to drone on about Dave all the time -- please forgive me -- but I suppose it’s normal in the early stages of a relationship to only have eyes for each other. I can’t believe I’ve only been with him three months. It seems like it’s been years -- and I mean that in a good way. Of course, we’ve seen each other pretty intensely all this time, so that’s part of it. Here’s to years more to come, and to me moving on to other topics in future blog posts!

I love to hear about Dave and food. What better topics! Here's to many more years of Dave stories and lots of love between the two of you!

Drone on? You aren't droning, Steve! I LOVE reading about you and Dave, and mostly I'm just so happy for you - for him, too, btw.

As for your dinner, I was feeling pretty happy about my grilled chicken skewers and tabbouleh (that I made last night) until I read about your dinner. Sheesh!!