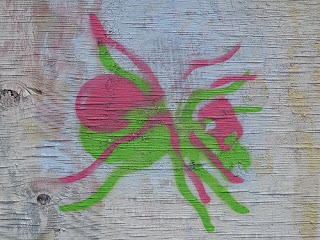 Well, as so often happens, my plans for this weekend went totally awry! I went out to Pennsylvania with Dave to visit his friend Adam, and we had a barbecue in Adam’s back yard. We bought some barbecue staples like potato salad and macaroni salad, put chicken and burgers on the grill, and lounged around eating and drinking red wine.

We had a comical moment after Adam’s friend Cathy joined us -- we ran out of wine, and because the liquor stores in Pennsylvania are all state-operated, they were closed for the holiday. Cathy and Adam volunteered to go back across the river to Trenton, and returned with some of the most godawful swill I’ve ever tasted. (Sutter Home “Red” -- it was like Kool-Aid.) Kudos to them for running the errand, but none of us could drink it.

After dinner Cathy left, and we three guys sat around and talked for several hours, watching the fireflies and the occasional spray of neighborhood fireworks as dusk closed in. Dave and I stayed long enough to spontaneously attend a 10:50 p.m. showing of “Star Trek” at the local cinema -- the second time for all of us -- and then he and I headed back to New Jersey.

Obviously, we’d discarded our original plans to come back to New York to see the fireworks from David’s apartment. It was just too far to drive from where we were, and I didn’t want to deal with the crowds, anyway. So we made it up to David by joining him for brunch Sunday morning.

Then, after I got back to Manhattan Sunday afternoon, I had a great time wandering the Lower East Side, visiting my favorite coffee shop on Grand Street and taking photos. The light was brilliant and the shadows deep and dark -- it was beautiful photography weather!

It sounds like you are back to good health if your stomach could take that holiday fare and not complain! It's really healthy that you have Dave AND so much more in your life.

You must promise to take one of those photography walks at about 1/3 speed if I ever come to NYC again!

Well, I passed on the burgers and definitely on the Sutter Home, so it's not all that remarkable!

I'll gladly lead you on a walking tour! :)

Gee, you sure pack a lot of living into life. Good for you.

Maryland and Virginia have bizarre liquor laws, too. It's weird, like traveling back in time or something.

The spider graphic looks like you need 3-D glasses to look at it properly. Very cool.

Glad you're back in the city, safe and sound!

Sutter Home? Used it as emergency window cleaner once. (True story. It works.)

So you were in my neck of the woods for the 4th while I was down at the shore. If/when you find yourself near Trenton again, hanging out & drinking, please give me a call.