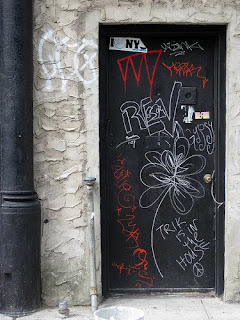 Each year my friend Mark, who lives in New Jersey near Asbury Park, gets together eight or ten of his friends and hosts a weekend sleepover, barbecue and beach outing that he has jokingly dubbed “Nuts in the Sand,” or NITS. (These are all gay men, and the beach is clothing-optional. You get the picture, whether you want it or not.)

Anyway, Dave and I were invited this year, but we only participated in part of the weekend. Mark hosted a dinner outing on Friday night, the beach trip on Saturday morning and the barbecue in the evening, and then breakfast the next day. Dave and I skipped the Friday night event, preferring instead to relax at his apartment that evening, and we skipped the beach trip -- we’re not really beach types, particularly when it comes to clothing-optional! But we joined Mark and the crowd for the barbecue and stayed over Saturday night, and we had a great time.

Mark has a beautiful house from the 1930s that he renovated in an older neighborhood called West Allenhurst, just above Asbury Park. The area is really interesting -- it was a faded beach resort that had struggled through some hard times (Bruce Springsteen is from Asbury Park -- think of the song “My Hometown”) before enterprising gay men and women moved in and turned the tide. It’s a popular gay residential area now. (Of course not everyone is gay, but as often happens with gay couples who have relatively healthy incomes and no children, they have money to spend on improving the housing stock and they don’t need to consider the quality of local schools -- except to contribute to their subsequent improvement through higher taxes.)

Anyway, we had a really great time. The more time I spend with Dave, the more I want to spend with him. It’s actually a downer to come back to Manhattan -- and I never thought I would say that!

Sounds like a great get-together with like-minded friends. I'm thinking you must no longer be a mostly vegetarian! :)

Were you looking at my rhubarb crisp recipe last night by chance?

I'm so glad you and Dave are enjoying each other's company so much. It seems this one's a keeper!

Steve I am so happy for you! This is the real thing, isn't it?

New Jersey is such a strange land. My niece and her husband live in Red Bank, close to Asbury Park. It's sweet, and really odd, though a very fun place to visit.

Glad you had a good weekend!

B: I was indeed looking at the rhubarb crisp recipe last night -- I sent Dave the link because we've talked about cooking with rhubarb and possibly making that dish. And I'm still mostly vegetarian, though it's getting harder to stick to that, LOL!

R: New Jersey is actually really beautiful. I've been having a great time out there. What's odd about Red Bank?

I certainly think Dave is a keeper!

I'm happy that you're happy.