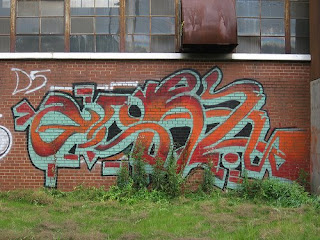 Back in the city this morning with my poor, neglected cat, who cooled her paws by herself this weekend while I was at Dave’s. Funny thing is, she doesn’t particularly seem to mind. Cats are the most low-maintenance pets EVER. (She’ll have me around nearly all this week to compensate.)

Dave and I had a great time this weekend, exploring New Brunswick and environs. We even went out to find some graffiti, and I gotta give Dave kudos for indulging me on this, because not everyone is into my little street-art obsession.

Several times we’d passed a bridge in town that was COVERED with graffiti, and on Saturday Dave pulled over and waited in the car while I scrambled down a steep embankment to shoot up at the bridge from the shores of the river beneath. 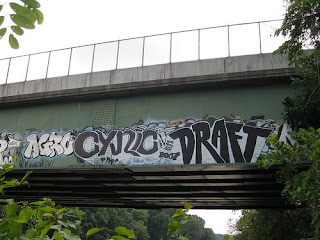 He also took me to find a building I’d spied earlier near the train tracks with some great pieces on it. I had to trespass a bit to get to it, so Dave hung back with the dogs -- no reason ALL of us need to get arrested! (We also discovered that bringing dogs along on a graffiti hunt can be a bit tricky logistically, because a certain amount of freedom and agility for climbing and exploration is required.) 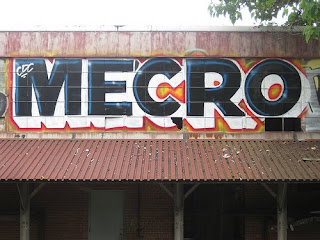 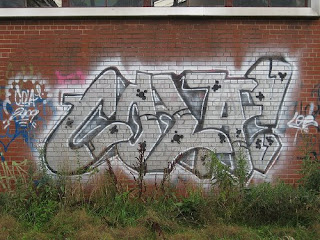 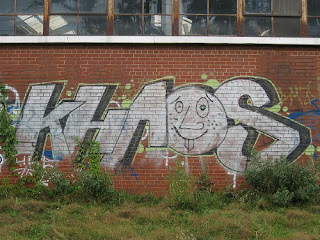 Yesterday we lounged around Dave's house and watched “Maurice,” the Merchant-Ivory movie adapted from E.M. Forster’s novel. I saw it in the theater when it came out in the late 1980s. Paging all Hugh Grant fans: This is one of his earliest appearances, and he’s more authentic, I think, than the bland dashing-yet-bumbling charmer he became in his later films.
Posted by Steve Reed at 12:33 PM

Seems like NJ has an unlimited supply of fine graffiti just waiting to be filmed.

Glad you're home with Armenia and she's so forgiving of your absence.

Must be sort of a let-down to go back to work after a weekend in the country.

If you ever make it to SF, I can give you my famed graffiti tour. We have our own brand of street art.