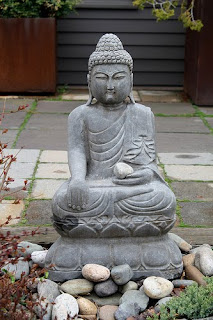 Did any of you watch filmmaker David Grubin's PBS documentary about the life and practice of The Buddha? It was a terrific film, with brilliant animation and artistry.

I've heard the Buddha's story a zillion times, but this time I was struck by how ordinary he was. Yes, he was a prince, and went on to become a spiritual leader for millions -- but he was also essentially a man who had a mid-life crisis, who left his wife and newborn son (whom he named "fetter") to go on a personal quest. Of course his personal quest wasn't to own a red sportscar or find a new trophy wife, which is what distinguishes him. He wanted to know why everyone suffers, why life is so painful, and what to do about it.

Buddha's teachings, despite their apparent simplicity, are easy to misconstrue and misunderstand. (I do it all the time!) Another aspect of this film that I enjoyed was its continual message that Buddha didn't expect us to eliminate all desires -- after all, some desires, like the desire to practice, are essential. Rather, it was thoughtless, mindless craving that Buddha sought to calm.

The movie included interviews with many prominent Buddhists including the Dalai Lama and poet W.S. Merwin. I particularly enjoyed a reminder from poet Jane Hirshfield, a Zen Buddhist, that Buddhist practice is not supposed to make us into perfect still-minded entities:

"It's alright to feel what human beings feel, and we are not supposed to turn into rocks or trees when we practice Buddhism. Buddhas laugh, cry, dance, feel ecstasy, probably even feel despair. It is how we know the world, it is how we live inside of our hearts, and not disassociate it from them."

Speaking of which, I sat this morning for the first time in several months. Now that I have my meditation cushions, I put them to use -- and I feel better and more connected already.

(Photo: A Buddha on Commercial Street, Provincetown.)
Posted by Steve Reed at 2:22 PM