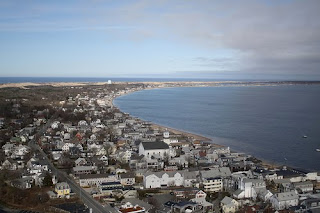 Whew! Back from Provincetown, where I had never been before last week. I definitely hope to return. It's a terrific place, low-key (at least at this time of year), quaint and artistic.

It's just what you'd expect -- lots of shingled, Cape Cod-style houses, a business district that looks straight out of 1955 (if you don't look too closely at the store windows!), docks, boats and seafood. Of course it's also a gay mecca, but the season hasn't really started up yet, so right now there are just a few scattered people on the streets and none of the flash and disco thump that comes later in the summer.

We had a great time despite occasionally inclement weather and the off-season atmosphere. I was worried when we first got there on Monday -- we were just in time for a rainstorm that flooded out parts of Rhode Island and filled basements throughout the region. We went walking Monday night and found virtually nothing open on Commercial Street, the main drag. I thought, "Wow. This might be a long five days!"

We were pretty much trapped in our guesthouse room on Tuesday. We read and watched movies -- fortunately our guesthouse had an excellent selection of loaner DVDs! 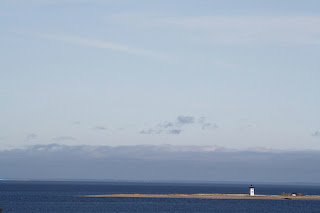 Finally on Wednesday and Thursday we were able to venture out, and though it was still gray the town became more lively. April 1 seems to be the magic date for many of the businesses to emerge from hibernation, and work crews were spiffing up the buildings and moving in new stock. We found several restaurants open (of varying degrees of quality) and we were able to go up in the wind-whipped Pilgrim Monument that towers over town.

Unfortunately, The Lobster Pot, which I photographed and posted a few days ago, was not among the open restaurants. In fact, I went the whole week without eating lobster. It's surprisingly scarce on menus -- we found it in one place for $42, which is too rich for my unemployed blood. 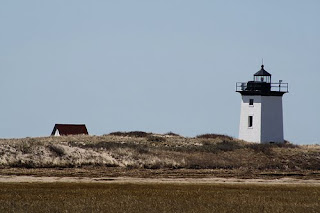 By Friday, the weather had improved substantially and we had lots of sun. Dave and I walked out on the breakwater that connects Provincetown to Long Point, across the harbor. We tried to take Ernie and Ruby but the rocks proved a little too treacherous, and they spent the morning in the car, lounging in the breeze with the windows down. I actually got a light sunburn.

It did us a world of good to get away. Dave and I had a chance to talk and spend lots of quiet time with each other, and compare notes about what we want to do with our lives. Fortunately, we're both on the same page. We share very similar ideas about what we need and how we define success, and similar fears and frustrations in our creative lives.

We're so enamored with Provincetown we'd love to move there some day, though admittedly I still need to see it in season to get a complete sense of what I'm in for!

Beautiful photographs, serene & peaceful. I love PTown but haven't been there since 2008 (Italy won out last year and will again this summer). We spent New Year's Eve there one year. Brrrrr! Quiet and lovely.

We used to see Norman Mailer around town quite often. Michael Cunningham is a prominent figure and Tenessee Williams first fell in love there. I adore the artistry of the place. I imagine being there with nothing to do but create. A wonderful existence.

It sounds like the perfect, low-key vacation for talking about the future. Maybe your careers will support a summer home in Provincetown. Wouldn't that be nice?

Too bad about the lobster prices. I hope that was just a seasonal thing and that lobster is not becoming such a rare commodity.

I hope you at least had some good clam chowder. There must still be lots of clams around.

We did have great clam chowder, Barbara! I don't know when lobster season is, but we concluded that we were merely there at the wrong time.

I am SO glad you had a great vacation, and really glad you and Dave continue to get closer and closer. Excellent news!!

I look forward to a day (most likely not in my lifetime) when there's no need for "gay meccas" or "black meccas" or "straight meccas" or even "artist meccas." I imagine a time when people can inhabit the landscape of their choice, and live in a society that embraces diversity.

Won't that be cool? In the meantime, if you guys move there, I want to come visit!! I love gay meccas.

Provincetown is a lovely place--I wouldn't mind living there!!!

Months with the letter "R" in them are not great lobster months.

Looks lovely there, Steve, and that 3rd shot has not a little touch of the Hopper about it. Glad you had a good break and that you're feeling better.(And what Reya said!)