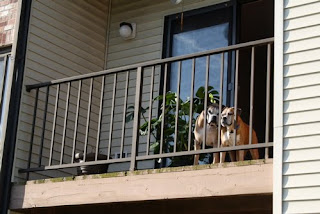 I returned from Florida to some bad news here at home. Ruby, one of our boxers, appears to be seriously ill.

When I leaned down to pet her after I got home, I noticed that her belly seemed unusually large. She’s never been particularly svelte, but this was definitely abnormal. At first, I thought she’d just put on weight, but Dave said he’d noticed it earlier that week and we agreed it didn’t look or feel like plain old fat.

I took her to the vet yesterday, where x-rays revealed that her abdomen appears to be full of fluid. The vet thinks she has a malignant tumor, probably on her spleen, but she couldn’t see Ruby’s organs on the x-ray to confirm her hunch. So today we’re having an ultrasound done. Dave took the day off to be with her.

Ruby is not a young dog -- she’s somewhere between 9 and 12 years old -- but I still feel sucker-punched by the news. Selfishly, I feel like I should have more time with her. I've only known her a year. Dave's got to feel ten times worse.

Everything is impermanent. Every moment counts.