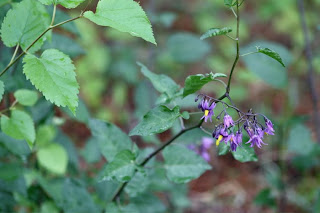 Here are some more mystery flowers that I found in the field behind our apartment. Anybody know what they are?

Speaking of nature, every time I hear any news about the oil spill in the Gulf, my stomach turns. I just can't stand to think about it. Newsweek ran a photo of bottlenose dolphins swimming beneath the slick that still haunts me -- and today I read an article about the spill decimating the population of endangered Kemp's Ridley sea turtles. I suspect we haven't even begun to understand the devastation that's to come.

I hear tar balls are already washing up in Key West and there's some concern the spill will loop out of the Gulf and into the Atlantic Ocean. If it hits the already-stressed coral reefs off the Keys, will they ever recover?

Of course BP and Halliburton should PAY -- they must face some consequences for this catastrophe. But I hope it reminds all of us of our role in the global energy marketplace and the need to be careful consumers. We're all part of the system that has put the Gulf in jeopardy.
Posted by Steve Reed at 1:49 PM