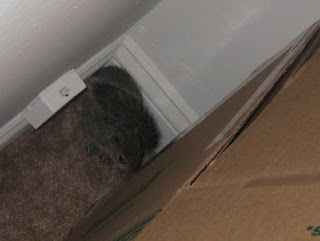 I was sitting in our living room yesterday morning, reading, when I heard the unmistakable sound of an animal clunking around in one of our closets. At first I thought it was one of the dogs, but then realized both were with me. This was something else. It sounded big.

I traced the sound to the back of the air conditioning closet, where there's a duct that seemed to house the trapped animal. It scrabbled around and occasionally squeaked frantically. I couldn't see it -- it was either inside the duct or in the wall. I called maintenance but by the time the workers showed up, the animal had quieted, and then remained quiet all day.

I thought it had escaped, but no such luck. When evening came, it started up again -- scratching and clawing and squeaking. That squeak, really more of a squeal, was the most pathetic thing I've ever heard. Eventually it began chewing, and then I realized that the back of the air conditioner closet -- an area tucked so far behind our air handler that I couldn't reach it even if I'd wanted to -- was also the side wall of the closet in our spare bedroom. I could hear the beastie behind that baseboard, chewing away.

I was home alone, and determined to get it out. It sounded so scared, and the idea of allowing it to die behind the wall was just too awful. I was pretty sure it was a squirrel, but I didn't care if it was the biggest, meanest brown rat on the wharf -- I was going to free it.

I had some tools, but I didn't want to just tear into the wall willy-nilly. So I called maintenance again, and this time the maintenance man heard the beast. He agreed we could open the wall, and he began the job with a carpet knife from our toolbox. When we made a small hole, we could see the trapped animal, which was indeed a young squirrel. It treated us like attackers, not rescuers, lashing out with its little claws and squealing and moaning in fear. (I'd never heard a squirrel moan. But trust me, they do.) 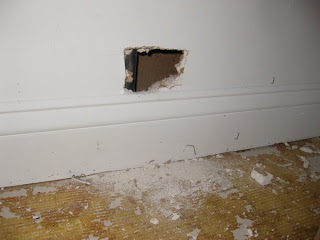 The maintenance man left to get some more tools and I made the hole larger. When it was about three inches across and two inches high, I was confident the squirrel could emerge. Problem is, it was so scared it didn't want to, and there was no way to safely reach in and grab it. I stapled a cloth laundry bag over the hole and baited it with peanut butter, thinking the squirrel might climb into the bag. No such luck.

Finally I removed the bag, turned out the light, opened the window and closed the bedroom door, thinking the squirrel might escape outside by itself. It came out of the wall pretty quickly, but then didn't seem to know what to do. It scampered around the bedroom, which is unfortunately our storage area -- unorganized and full of lots of squirrel hiding places.

About this time, Dave came home. We gave the squirrel the suitably androgynous name of Sam. 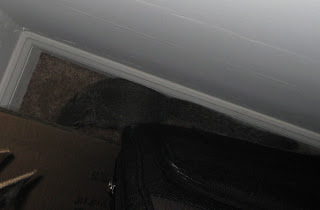 At least now I knew it was going to survive. I put down a saucer of water and a few chopped walnuts, and Dave and I went to bed, thinking it might get outside by itself during the night. But this morning, it was still there, tucked into a corner.

So we began the arduous process of removing everything from the room -- boxes, luggage, a bicycle, pictures, stacks of books. Finally we had almost everything out and there were few places left for the squirrel to hide. We chased it around with a bedsheet for a while, finally trapping it. We took it outside and it streaked away toward a bush, no doubt thinking it had gotten the best of us.