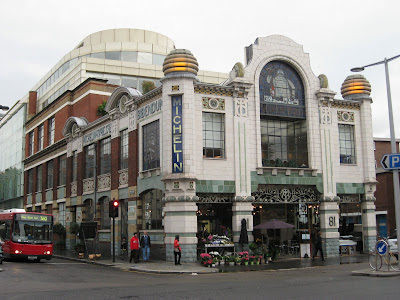 For our anniversary, I took Dave to Bibendum, a restaurant that has intrigued me ever since I read about it in Metropolitan Home magazine about 20 years ago, when it first opened. It's in the former British headquarters of the Michelin Tire Company, and the Michelin Man -- whose name is apparently Monsieur Bibendum -- figures prominently in its decor. Sir Terence Conran, one of the owners, and the Conran Design Group are behind the restaurant's design and it is truly a beautiful space, with huge stained glass windows featuring Monsieur Bibendum himself. 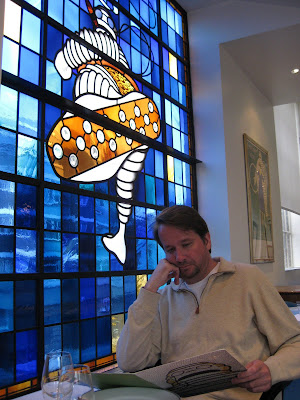 The windows are apparently replacements for the original stained glass, which was put away for safekeeping during World War II and subsequently lost. In fact, Michelin has declared a stained glass amnesty program that encourages anyone who has the windows -- or pieces of them -- to come forward and return them, no questions asked. Here's Dave, reading the menu beneath an image of Monsieur Bibendum doing a sort of kickboxing move. 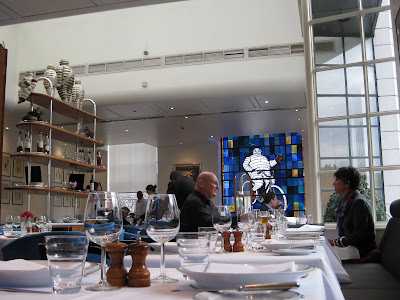 The restaurant is celebrating the building's 100th anniversary with these fanciful dishes (below), depicting the Michelin Man himself. In our case, the dish was used to serve butter. One wonders about the wisdom of the knife placement (or was it intentional?) but I do think they're great dishes. 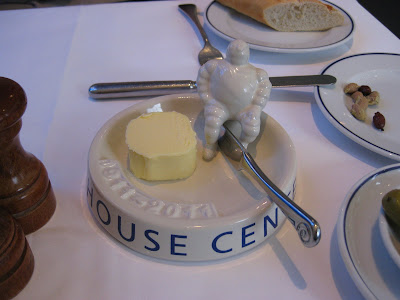 Unfortunately, we can't say the same for the food. Both of us found our dishes significantly lacking. I was torn between two options and asked the advice of the waiter, but he only laughed. Maybe he knew something we didn't. Anyway, I wound up with the soup of the day, a green vegetable potage that had no readily identifiable taste, and a soggy scallop dish that bordered on the genuinely horrible. Dave had an over-salted fish steak that came with several very large bones, offending his French Culinary Institute training, and came surrounded by tomato salad -- which the waiter should probably have mentioned when Dave ordered an additional tomato salad, leaving us aswim in tomatoes.

Interestingly, the restaurant has four stars in Time Out London, and other diners rave about it online. So maybe someone was simply having an off night. In any case, I found the decor and the building the main reasons to go. (And we did have a good wine, a French chablis.)
Posted by Steve Reed at 3:52 PM