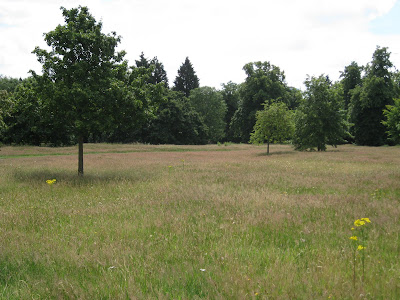 As I was waiting for our phones to be repaired on Friday, I walked through Hyde Park and Kensington Gardens. Together, these adjacent parks are more or less the Central Park of London, full of big, grassy spaces, fountains, ponds, statues and trails. Almost immediately after I entered the park at Victoria Gate I was just about the only person around. The trail wound through a large, unmowed meadow where insects buzzed and wildflowers grew among the tall grass. I was impressed that the area had been allowed to go somewhat wild. 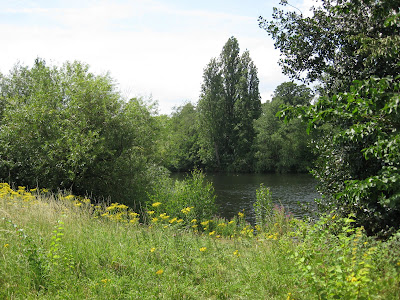 Eventually the trail came to a pond known as the Long Water, which I could see only through a gap in the trees. A bench sat at that spot, dedicated to a man named Rudolf Steiner, who apparently loved it there. I sat for a while in Rudolf's company.

Then I walked on and found a more populated area, a set of fountains where people were sunbathing and children in school uniforms were eating ice cream. On a map I saw that a monument stood nearby to John Hanning Speke, the first European credited with finding the headwaters of the Nile in the mid-1800s, so I decided to go see it. 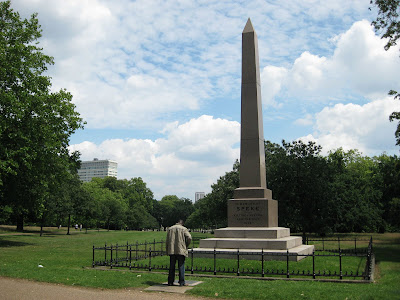 It turned out to be somewhat lackluster, just a big obelisk. Speke stands out in my mind because of that scene in the 1990 film "Mountains of the Moon" -- about him and his partnership and, later, rivalry with fellow explorer Richard Burton -- when he jams a pencil in his ear to kill an insect that has made a nest there. The Nile may be his claim to fame, but I remember him more for that crazy self-mutilation, which may or may not have really happened. 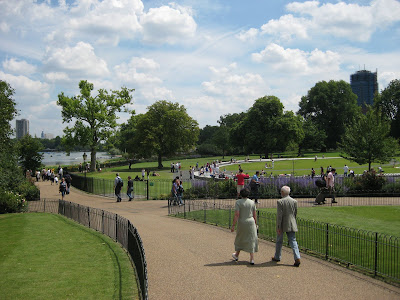 Anyway, I walked on to the southern shore of The Serpentine, the largest body of water in the park, where boaters were rowing and people were lounging around a peculiar ring-shaped fountain dedicated to the memory of Princess Diana. I had lunch at a cafe called the Lido -- a salmon salad with peas and beans -- and then walked back via Marble Arch to the telephone shop.

Fortunately, the apartment we're in the process of renting is close to Hyde Park, so I hope to become even more familiar with it!
Posted by Steve Reed at 7:37 AM