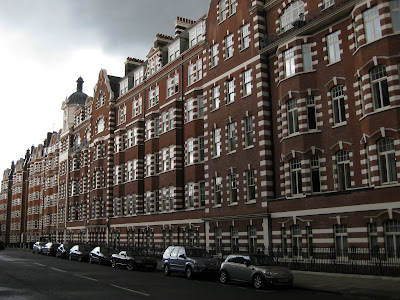 What do you think of when you hear the words "spa facial"?

You probably think of someone with green goop all over their face and cucumbers on their closed eyelids.

Well, yesterday, that was me.

Dave treated me to a "gin & tonic" spa treatment yesterday afternoon at the Chancery Court Hotel, a swank establishment in Holborn. We descended the hotel's marble stairs into a glowing, golden, herb-scented "relaxation room" that reminded me of the set of a science fiction movie. Round and columned, it looked like a courtroom on the planet Vulcan.

We were then taken into separate treatment rooms where I got the best massage of my entire life. First we were scrubbed with a salt-oil mixture including juniper berries (part of the "gin & tonic" theme), then we showered and were treated to a lengthy massage. Finally we each had facials involving repeated applications of various hydrating creams, toners and who knows what else.

I'm not sure whether any of these creams were actually green, but I really did get cucumbers on my eyes. At least, I think that's what they were, since I couldn't see them.

I'm making fun of the experience, but it really was terrific. Thanks to Dave for the first anniversary (!) present, which definitely felt like something Edwina and Patsy would do in "Absolutely Fabulous"! Our actual anniversary is tomorrow, and my present is still to come.

(Photo: A block of flats off the high street in St. John's Wood.)
Posted by Steve Reed at 8:11 AM