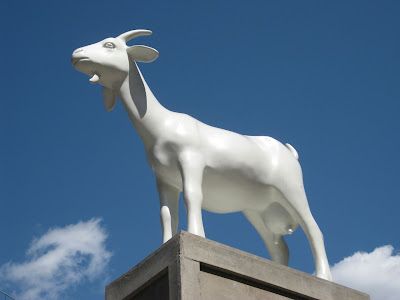 Isn't that the most triumphant-looking goat you've ever seen? It's a proud goat, a Goat of the Empire. What it's doing standing on a pedestal of boxes outside the Spitalfields Market I'm not sure.

We're settling into our new pad, and I am SO HAPPY to finally be able to put our bags down and unpack. When it comes to moving into a new apartment, I am a whirlwind. I can't rest until everything is done -- every box unboxed, every shirt on a hanger, every gewgaw unwrapped and on its proper shelf. I'm running circles around Dave and probably making him crazy, but by golly, we do have a home!

I went out today to buy bedsheets for our guest bed. Although we shipped our mattress and sheets, none of that has arrived yet -- so we needed bedding for the bed that came with the flat. I bought a "complete bed set" from Debenham's, which appears to be the JC Penney of England, and it came with two pillows, a duvet and a mattress pad. I also bought a "duvet sheet set," including two pillowcases. One would think that's all I would need, but apparently a "duvet sheet set" doesn't include a bottom sheet. I am mystified by why this is true, but in any case, I now need to return to Debenham's.

While I was shopping, Dave had our television -- which we got for free thanks to a departing ASL teacher -- mounted on the wall in our living room. It looks pretty great, and it's so nice to have it off the floor.

During my unpacking I found a mailbox key from our old apartment complex in New Jersey. I mailed that back to the management office this afternoon, which may seem silly, but I know from my days on the co-op board of my New York building that mailbox keys are expensive to replace. Plus it gave me an excuse to go for a walk and find the post office.

We live in an incredibly fancy neighborhood. Jude Law, Brigette Nielsen and Sienna Miller are reputed to live nearby, according to some neighbors I met last night. Someone who's dating one of the "Top Gear" guys reportedly lives in an apartment in our complex. (How's that for an obscure almost-brush with fame?) While I walked to the post office today I was marveling at all the tony shops, the designer boutiques and expensive salons. I am plagued by a nagging feeling that we can't really afford this neighborhood! I mean, we worked the numbers a hundred ways and it seems perfectly doable -- but how can that be true? How can I be Jude Law's neighbor?

Are we going to wind up in British bankruptcy court? I doubt it will come to that, but if so, we'll certainly be stylish on the way there!

Our apartment is less expensive than much of the surrounding real estate because it's on a former Council Estate, which as far as I can tell basically means public housing. The complex has been converted to private ownership, but fewer than half the current units are still occupied by former council residents, my neighbors said. Still, it's pretty posh around here.

Our landlords, being amazingly nice guys, not only supplied us with furniture and many amenities, but they left a bottle of pink champagne for us in the fridge. So yesterday evening Dave and I had a little celebration in our cozy new home!
Posted by Steve Reed at 3:07 PM