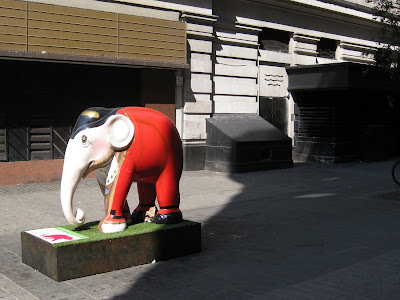 Dave and I spent the weekend doing touristy things, like going to Buckingham Palace and walking around near Parliament, Big Ben and Trafalgar Square. The tourists were out in force on Saturday -- and far be it from me to scoff, since I'm essentially still one myself. The crowds were unbelievable, and they all seemed to be Italian teenagers. Go figure.

We got soaked waiting for the Changing of the Guard at the palace, which was canceled anyway because of the rain. So we wandered into a nearby pub called The Phoenix and had a couple of pints near the fireplace, which seemed cozy even though it wasn't lit.

Yesterday we went shopping for a voltage converter so I can charge my camera batteries, since my chargers all fit American outlets. (They're just about the only things we brought that have a plug.) While wandering near Oxford Street I was happy to realize we were close to Goodge Street, immortalized in a Donovan song from the mid-'60s as "Sunny Goodge Street." I was even happier that it was raining, as it gave me the opportunity to have Dave photograph me beneath the Goodge Street sign holding an umbrella -- a '60s music joke that most people probably wouldn't get. (Dave told me I was born at the wrong time.)

The journalism world in London is exploding at the moment, or perhaps imploding, with the fallout from News Corp's phone hacking scandal. The allegations that reporters for The News of the World, and maybe other Rupert Murdoch publications, hacked into the voice mail messages of everyone from crime victims to the royal family have deposed several News Corp executives and now the chief of the Metropolitan Police.

It's interesting, though, that most of the heat seems to be coming from politicians and media outlets. People on the street seem unfazed by the scandals. I haven't spoken to anyone in depth, but I never hear it being discussed around us in restaurants or bars. It's as if people just expect this sort of behavior from reporters.

I find it all a little boring too, I must admit, despite my journalistic background. Of course the hacking is appalling, and it's appropriate that heads should roll. But this is just more bad behavior from a corporation that's devoted to bad journalism, skewing its news to the right and pretending to be objective. Are we at all surprised that Rupert Murdoch and his minions will go to such lengths? I'm not.

(Photo: Off Oxford Street on Friday, when it was still sunny.)
Posted by Steve Reed at 9:13 AM