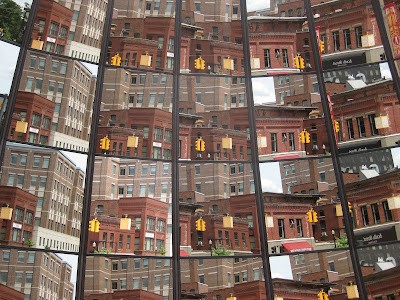 Our purging activities have temporarily stalled as we visit Western Michigan, where Dave lived and taught before moving to New York in 2008. We're staying with his friend Annie and her family. They're terrific hosts with a beautiful house, and we're staying in their finished basement, which is nicer than any living room I've ever owned. The accommodations are quite plush.

Two nights ago we had dinner with our friends Kellee and Stephanie, as well as Kellee's boyfriend Brian and Stephanie's brother Neil. Stephanie, who like Dave attended the French Culinary Institute in New York and lived there for a while, made dinner.

Last night we grilled salmon at Annie's and ate on the patio by the pool with her husband and son, trading stories about our lives and our families. Apparently Dave's father had an episode yesterday with previously undiagnosed glaucoma, which we learned only by chance when we called to find out whether our furniture was selling. But he had an outpatient procedure and he's doing fine.

I went walking in downtown Kalamazoo yesterday, where I took some photos and had a good time, despite the fact that nearly every business was closed. (Not only Sunday but also Fourth of July weekend!)

I'm not sure what's on the agenda today. Maybe a little local road trip.