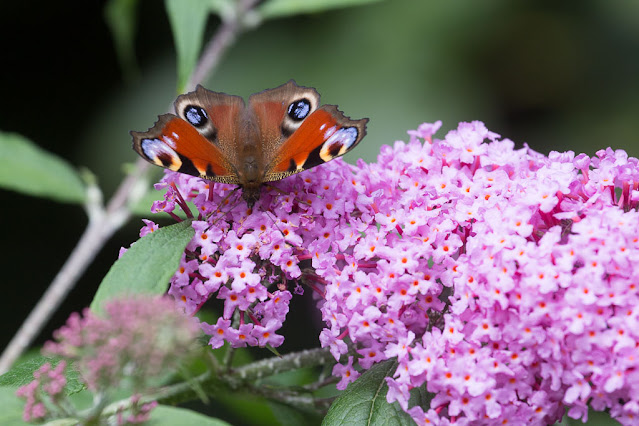 Remember how I was just saying I hadn't seen many butterflies this year? Well, this peacock came around yesterday morning, checking out our butterfly bush. A welcome visitor!

And that wasn't the only excitement around here. Dave and I were officially notified that our garden video will air on the next episode of "Gardener's World," on BBC Two, tomorrow night! So those of you in the UK can tune in at 7 p.m. and see our little segment about "re-wilding" our garden by mowing less and allowing more weeds to grow. We're both in the video and Olga makes a brief appearance, too. (At least, she was in the footage we submitted -- the BBC routinely re-edits viewer videos so I'm not sure what will actually air.)

The only way I know of seeing the show in the USA is to watch it on Britbox, which is a subscription service. Some episodes do turn up on YouTube, so you might catch it there -- look for Episode 19 of the current season. I'll record it myself but I don't know if I can post it, since I think whatever airs becomes the property of the BBC. I'll look into it.

Thank goodness I filmed the video before the great teasel collapse of 2021! Yesterday I went to Homebase and bought some long bamboo plant supports, which I jammed into the ground around the teasels in order to tie them upright. I WILL DOMINATE THESE PLANTS! Originally I had them tied to each other, which I think is what precipitated the collapse -- a weakness in one plant brought all three of them down. Now they're supported individually, which seems more stable.

And yesterday, they endured...


...yet another downpour, and this time they didn't budge. They're upright as I write this. Again, in a high wind, all bets are off, but at least this fix seems longer-lasting. They're a bit droopy but I think they'll grow more upright over time. They've been traumatized!

I also walked to work yesterday and made a visit to the library. I wanted to bring some of my finished books back and check up on the construction occurring there over the summer. The place is still a mess, but we've got two or three more weeks before we go back to work so the facilities people can still whip it into shape.
Posted by Steve Reed at 7:39 AM