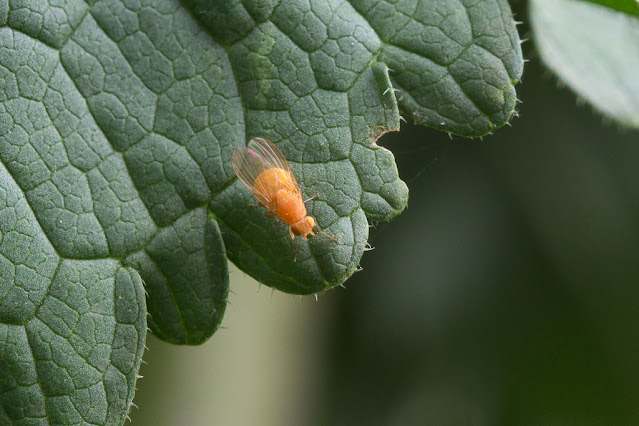 Well, my Day 8 Covid test came back negative, as I knew it would. I got the results just before setting out to Homebase to pick up a bag of compost, so I could walk among the public with a clear conscience. Back to real life!

While there, I also bought a couple of flats of coleus, which I love but haven't planted in ages. The monkeyflowers and calceolaria I bought back in May had both gone to seed, so I replaced them with the coleus. It's funny that Dave and I used to avoid planting annuals -- they're actually quite liberating to work with. When they start looking shabby, there's no need to go to heroic measures to save them -- they're going to die anyway. Just chuck 'em and plant something new! 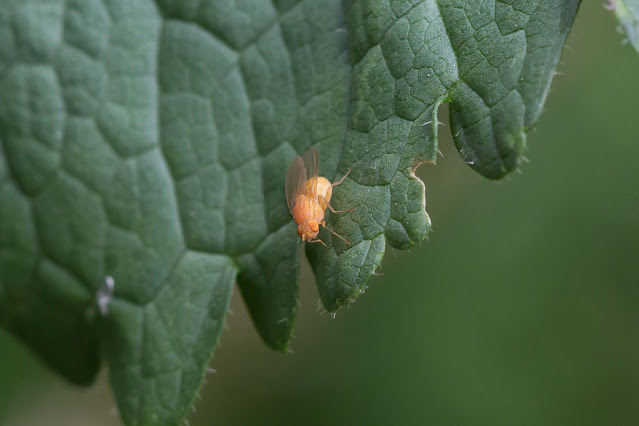 I found this weird little orange fly on our wounded teasels -- which, incidentally, have collapsed again. We had some wind yesterday and that was that. Their days are numbered, but I'm leaving them for now, leaning on the bird feeder and some nearby rose bushes, while they continue to bloom and provide some insect habitat.

I have no idea what kind of fly this is. I'm sure I've never seen an orange one before. 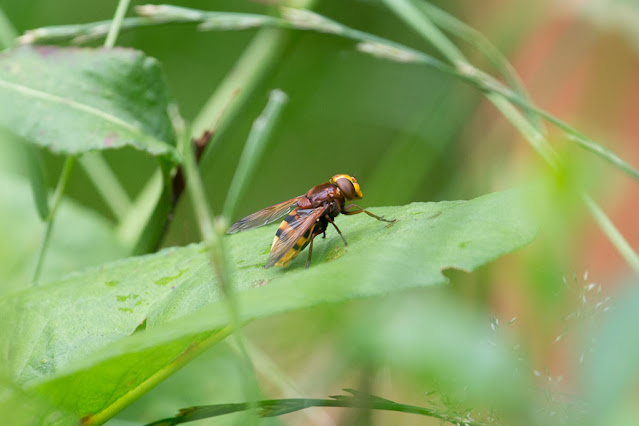 I also saw this the other day -- a big hornet hoverfly. It looks a bit scary, which wards off predators, but it's completely harmless.

We've begun a routine with Olga where we give her a can of dog food every evening. We used to do it only occasionally, but she loves canned food so much and gets so excited that we figured, why not daily? Well, last night, as I went to fetch her food, I realized with horror that we were out -- so I had to leave her standing in the kitchen, puzzled, while I zipped down to Waitrose. I bought two cans of dog food and a bottle of red wine, and as the clerk was ringing up my purchase, I said to myself, "I hope she doesn't think this is MY dinner!"
I watched the first two episodes of a TV miniseries from the '70s called "Holocaust," featuring Rosemary Harris, James Woods, Michael Moriarty, Tovah Feldshuh and a young Meryl Streep. I remember watching it when it came out, in 1978 or '79, and finding it riveting -- and watching it again has not been disappointing. What strikes me now is the similarity of the Nazi rhetoric against Jews to the way many modern conservatives contemptuously speak about liberals and Democrats -- and let's face it, among some anti-semitic people on the far right, those are essentially code words for Jews and the old tropes about Jewish conspiracies. It was chilling to make that contemporary connection.
Posted by Steve Reed at 7:07 AM