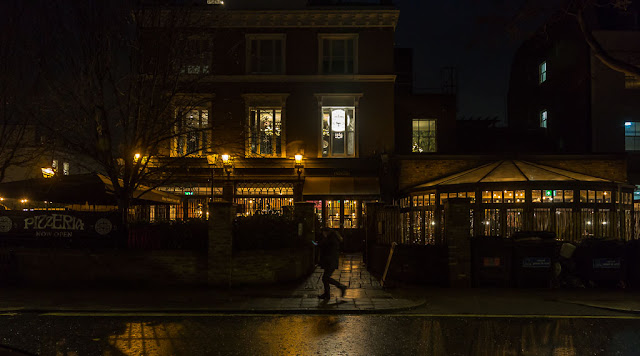 I pass this Pizza Express restaurant on my walk home from work, and it always looks so inviting, brightly lit and with all those windows. I've never been inside it. One of these days I'll have to go.

I wanted to shoot it on a wet evening when the pavement would reflect the light. We had that kind of weather on Monday and I happened to have my camera, so I thought I'd finally have the opportunity -- and then when I got near the restaurant I realized that some guy had pulled his car onto the sidewalk (!) opposite the restaurant exactly where I needed to stand. I couldn't believe it! So I had to position myself right next to the car and take my pictures over the roof as he sat inside it adjusting his GPS, which was awkward, to say the least. 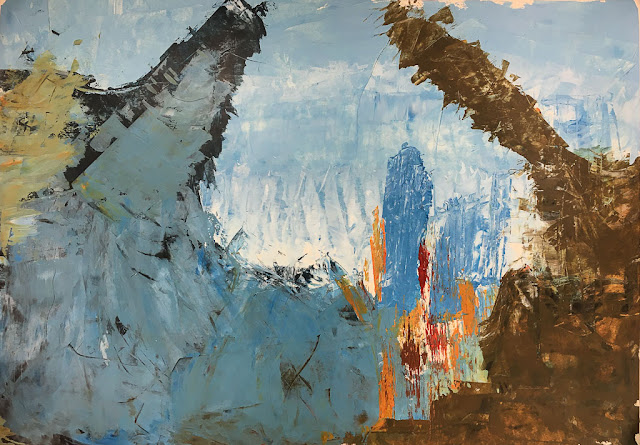 A couple of weeks ago at work, during a staff/faculty development day, we attended workshops led by some of our fellow teachers. I went to one on racism and Dave attended one on painting. I was shocked that he chose painting as I've never seen him pick up a brush or show any interest in visual arts, but I guess he wanted to try something different.

He didn't bring home his art -- I suppose it needed to dry -- and when I said later that I wanted to see it he acted like it was terrible. The art teachers sent him a couple of e-mails asking if he wanted it, and I urged him to go pick it up, but he wasn't all that enthusiastic. Finally I went to the art department yesterday and collected it myself.

His suggested subject was New York after a rise in sea levels, and he painted it with a palette knife. I think it's pretty cool!
Posted by Steve Reed at 6:42 AM