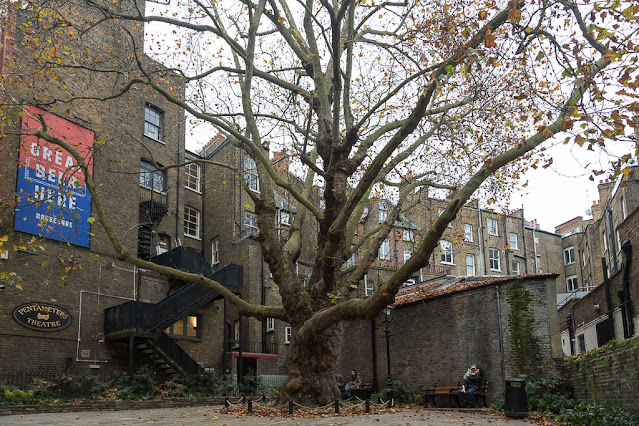 Of course, about 20 minutes after I posted yesterday, Blogger ironed out its photo problems! Oh well.

Above is a little pocket park in Hampstead called Oriel Place. It used to be fenced off and inaccessible -- here's a photo I took in February 2013 that shows what I mean. Within the last couple of years the council put some money -- raised from a local infrastructure levy -- into it and now people can sit on the benches beneath that magnificent old tree. I think it's an improvement but I believe the project was contentious for some. I hope the paving doesn't affect the tree's health.

I spent yesterday morning on a couple of projects -- routine stuff like laundry and plant maintenance, but also cleaning the interior of the front windows. This was a fairly major undertaking that involved moving everything on the windowsill and climbing up on a chair, but they look a million times better now. And since we bought the dehumidifier they hopefully won't become as grimy from condensation as they were.

I also read all of "Caddie Woodlawn," a fantastic Newbery book from 1935 about a girl growing up on the Wisconsin frontier in the 1860s. Such a refreshing change after some of the dogs I've read recently! It was like Laura Ingalls Wilder without the dubious references to Native Americans. In fact I wonder if Wilder's books prompted Carol Ryrie Brink to write this one, as it came out just a few years after "Little House in the Big Woods."

Finally, last night, I went to that pub gathering for the birthday of one of my co-workers. I took Olga along, thinking they'd all like to meet her, and I knew that way I wouldn't stay long. Olga wasn't thrilled about going out on a cold, dark night and tried several times to turn for home, but I finally got her to the pub (which involved a short trip on the Overground). Once there, she would not settle down and indeed I only stayed for two quick glasses of mulled wine before bringing her home again. Apparently Olga is not a night owl.

Oh, and Ratana stayed away yesterday! Could it be that he/she listened to me?!
Posted by Steve Reed at 6:59 AM

Took me a moment to work out your last comment and then I realised. I had Ratana visit the Bikeshed there times yesterday; clearly I'm in favour!

I don’t think Ratana actually listens to anyone. Maybe the automated trolling has run its course and Ratana will appear under a new name. That pocket park is a huge improvement. I hope the neighbors concerns don’t turn out to be true. It would be a shame.

I wonder why the park was inaccessible earlier? Good to see people sitting in the park now.

We older people here aren't keen on night time outings. In fact we just don't do them now, aside from a dinner when we are home early.

I don't think Ratana's employer will pay her weekend penalty rates, so she stops commenting at weekends.

Calling Ratana! Calling Ratana! Come in please! Steve is missing your thoughtful comments upon his carefully crafted blogposts. We need your wise inputs to maintain our blogging standards. Thank you for all you have done.

That tree in the little park is a beauty. Olga is a true homebody!

That tree is amazing, and I, too, hope the paving doesn't hurt it.

I could use an Olga when I go out at night sometimes...

I would HOPE that before "they" (whoever they is) paved the little park, they did a study and consulted some arborists about whether or not the paving would endanger the tree's root system. It is a beautiful old thing.
I know EXACTLY how Olga feels and if you had dragged me out at night I would not have settled down either. We older ladies do like our evening home comforts. But it was a good effort on your part and I completely understand your rationale.

I understand Olga's dislike for going out on that dark cold night. That's time for snuggling under the blankets not partying at the pub.
Such a beautiful old tree there.

You'd wonder why some of these books won the prize.

And Ratana! I thought I was the only one plagued. I hope they listened to you for me, too.

I'm older and bars aren't my scene either, although I like to have a pint of beer out once in a while.

It's too bad they got rid of the grass, although the benches and it's openness is much nicer.

Personally, I prefer the tree as it was before; if only they could have just taken down the fence. It doesn't seem right to surround a tree with paving. In my opinion they missed the mark with this one. I'm surprised I'm feeling so strongly about a tree I never saw and will never see in person. It feels like the folks who came up with the idea didn't see a tree as having a natural environment but rather as being just an element in a man-made design.

There is a man who lives here who has a dog that reminds me of Olga. His name is Frankie and when his owner tries to get him to move from my side he crouches down really low and refuses to budge. Since we live in the same building I have to walk to our apartment with him so his owner can get him home lol.

My kids loved the Newberry books growing up. Especially my daughter Laurie. She won two trips in high school for reading the most books and 3 of them won trips to Six Flags Over Texas amusement park so I have always encouraged reading!

I adore that tree, and I hope that it stays healthy for many more years.

have a wonderful week ahead!

I'm glad that park wasn't created near where I live. I don't have time to spend sitting there looking at old trees like that and yet I'm completely captivated by them. Yes, it is quite the time savor being clear across an ocean from me.

Ratana visited me one time. Never came back though.
That old tree looks so nice!

Maybe he, she or it got your message. talking about ratana. Steve I've had calls from scammers trying to buy my house. I tell them to leave me alone about my mf house because just like I knew how to buy it I also know how to contact the same agent and sell it. To have my cell phone number is weird and the only way I think they got it is through the tax office. Someone there is selling information. Scammers everywhere you go these days. I know they are looking at my age and thinking they can scam me out of my home. I also tell them since you have the phone number and address you need to ride by and knock on my door so I can put your ass in the dirt or the hospital. (laughing hard) They will hang up on me. Several called me trying to pretend they were from Social Security and they were telling me my number had been used in a forgery. I told this lady you need to get off your scamming ass and get a job because Social Security will not call anyone and you have problems trying to call them. Then they hang up very fast. (lol)If you go to that link that Ratana is leaving it is probably the black web and they can take over your computer.

Oh that's hilarious - I was going to say that Ratana was alive & well on mine & Ellen Abbott's blogs, and here they are on yours again (right above my comment for anyone reading this after Steve deletes it).

I'm in Olga's camp. I was just telling someone today that I really resent having to leave my house for anything other than going to work. I'm turning into a crotchety recluse!

I'm a "Caddie Woodlawn" fan too. Glad you had a great read after slogging through "Silver Tales". Caddie was a brave, kind and sturdy role model to this youngster.

Ratana needs to get lost...Poor Olga!

She's been back visiting me, too. Clearly she does not read my posts!

Ratana's real name should be BOTana.

I don't know why it was initially fenced off. Maybe one of those news stories says, but if I ever heard I don't remember.

She really is, especially after the sun sets!

She really was a great excuse to go home again!

Olga used to lie down on the ground and relax, but for some reason on this night she was having none of it. (Maybe she was too cold.) Dorothy IS a homebody!

You would think. This type of tree is very common along streets in London so I assume if they can survive there it won't have a problem in this location.

She really was NOT into it at all!

I do wonder that. What other books were they up against?

I love mulled wine on a cold winter night!

Yeah, they're not really my thing either, which is why it was nice to be able to say, "I need to go home because of the dog." :)

She likes them when they're in our house -- not that we've had one in a while!

I don't know why they didn't keep a circle of grass beneath the tree, though. They didn't have to bring the paving in quite so close.

I kind of agree with you. I think they could have surrounded it with paving but left more exposed grass directly beneath the tree. The best solution was somewhere between doing nothing and what they did!

Which books were your kids' favorites? Do you remember?

Count yourself lucky. She/he/it comes around here every day!

Well, now you can look at a picture of one whenever you want! LOL

I like your approach, Angelica! I'm glad to see you know how to deal with these people! LOL

Yeah, Ratana came by again. Just when I thought it was safe to go back in the water! ("Jaws" reference)

It's such a good book! Apparently the author lived in Idaho -- maybe that's why you know it?

Well, you'll be glad to know Olga had a leisurely warm day indoors yesterday and is now completely recovered. :)

I did not know that! Nope - I met her when I lived in Burnt Hills NY (not too far from Albany). Idaho came much later.