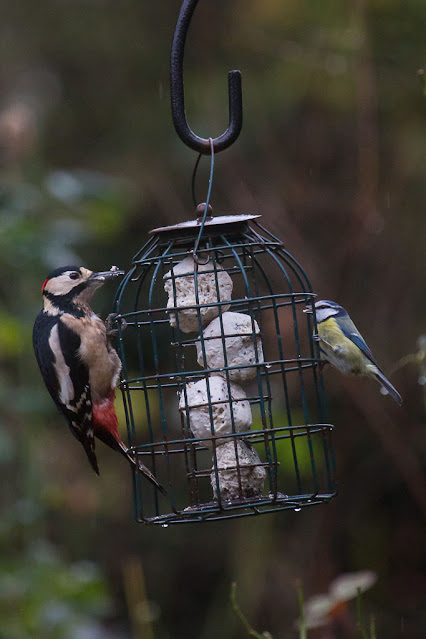 We had more interesting visitors to the bird feeder yesterday morning. I'd just been telling Dave that I hadn't seen many tits around recently, but then this blue tit showed up -- and it shared the suet balls with a great spotted woodpecker, which was exciting. 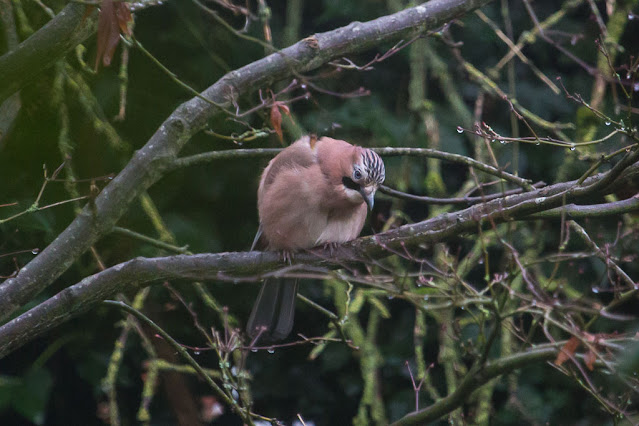 Not long afterwards, Dave looked out the windows and back toward the maple tree, and said, "What IS that out there?" It was a big brown bird and at first I thought it was a small hawk or raptor. But when I looked at it through my zoom lens I realized it was a European jay. It was probably looking for the peanuts I set out on our garden bench one day last week when I cleaned out the feeders.

Once again I tried unsuccessfully to take Olga to the Heath. I think she would have gone if it hadn't started raining about ten minutes into our walk, which prompted her to turn right around.

On the way home we passed a box of discarded CDs in front of a shop. I looked through them -- Ray Charles, James Brown, Bob Marley, some more modern bands I hadn't heard of -- but didn't see anything I wanted.

And then we passed this shop nearby: 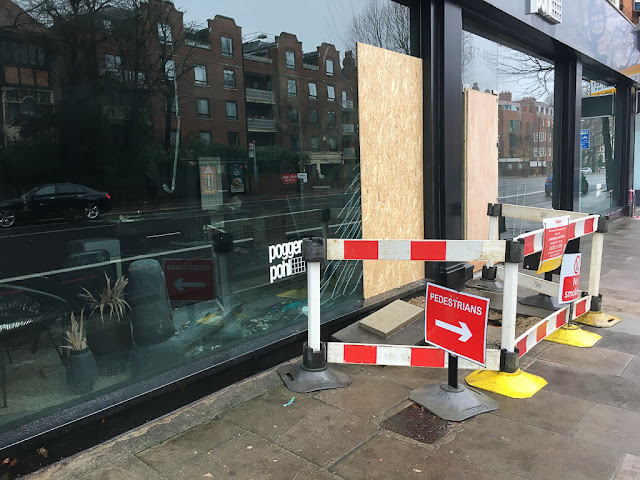 Obviously there'd been some drama here, as the door and window were smashed and the interior was blackened and full of ash. I got home and found this maddeningly non-specific story that I assume must be about this incident. (It would help if the reporter had said exactly WHERE that fire occurred and WHO occupied the shop in question, among other things. What about witnesses? Neighbors? A statement from the shop managers or owners? It seems she didn't try very hard.)

Anyway, assuming this is indeed the fire that occurred in the early morning hours on Wednesday, Dave and I had no idea. And we only live a couple of hundred feet away, as the crow flies.

Last night we watched "The Electrical Life of Louis Wain," which I enjoyed a lot, especially after seeing the exhibit of his work just a few days ago. It was well-acted and full of interesting visual effects, including an animation sequence showing how Wain himself may have been experiencing his own psychedelic cat art.
Posted by Steve Reed at 6:33 AM

The “PEDESTRIANS” sign in front of the building is a bit odd. It’s not as if they’re being directed to cross the street. “If you don’t see the barrier, maybe you’ll see the sign.” Although I was never a reporter, I, too, am driven crazy by these lazy writers who don’t bother to offer any useful information.

I’m always amazed by the wildlife you attract to your garden.

The best show I watched lately was about a Christmas Carols. Very interesting. I love your birds! Enjoy your day, hugs, Edna B.

Sally Patterson needs extra journalistic training and I know just the fellow to provide it. Go easy on her dude - she's only fourteen!

So many news stories in local newspapers now are non specific. It's annoying, but I've always assumed it was because of legal reasons.

You certainly have some interesting visiting birds. I suppose the blue bird is the blue tit and the other, a woodpecker.

Don't we all want details when a tragedy happens. It is human nature.

Who, what, when, where, why and perhaps how are the questions that should have been answered.

I love the gathering of birds visiting your garden; such a collection.

That article almost sounds like they just cut it, leaving half out.
Your birds look so exotic to my N. American eyes. They are just beautiful.

I've been getting mostly cardinals, titmice, chickadees, white wing doves, and wrens. Haven't seen any of the little warblers that usually winter over here. No sparrows either. Your blue tit is so cute.

Love seeing the birds there. How sweet that the two birds shared the suet feeder. And that European Jay is a beauty.
Weird about that fire and not very much news. Mmmm?

A holiday feast for the birds.

The shop looks like a big mess and if it's burned inside it's serious.

Beautiful birds in your yard! Lucky that you got them to stay still for a minute. I am with Olga , walking in the cold rain is less fun every year.This snow keeps everyone in as well. Glad i do not have Dexter to deal with right now.
Maybe you could put your journalism skills to work there, clearly they need a better one!

I'm surprised to see the woodpecker partaking of the suet. I only see them in the trees here. We mostly have red-headed woodpeckers and pileated woodpeckers. If you've never seen the latter, you should look them up. They're impressive! (in both sight and sound)

I love all the interesting birds that visit your feeder and garden. You are so right about that newspaper article. It certainly doesn't tell you much of anything.

Good to see English birds, if you follow me! That jay is a first for me, since where I live is the territory of the bluejay.

About the barrier. It means pedestrians walk around, all others leap.

I heard lots of sirens on Christmas Eve and wondered what was going on, but never found out anything. I'm with Olga! We have so much snow and cold here that I brewed an extra pot of coffee.

I think Olga knows best, better than many Englishmen perhaps. When it rains, stay inside.

I just assumed that as a gay man, you didn't see a lot of tits:) My bad.

It would have been nice if the reporter give the exact location of the incident. The birds are cute! Olga has strong likes and dislikes it seems

Jays are the most beautiful of birds

It IS funny they felt the need to put that sign up. Where else would a pedestrian walk in that situation?

That does sound interesting. I'm sure there's a lot of history about Christmas carols that I don't know.

She got a press release or a tweet from the local fire brigade and simply rewrote it with no additional information.

I'm sure some of it is -- when it comes to naming suspects, for example. But I can't imagine why this reporter would be legally prevented from saying "The fire occurred at the Poggenpohl store at 477 Finchley Road."

When it happens in my neighborhood I certainly do!

Also, the fire department's tweet said the fire was believed to have been electrical, and her story omitted that information completely.

She missed a lot of the basics!

As I told YP above, she basically just rewrote an already vague press release without adding any of her own information.

Blue tits are very cute and colorful birds -- and fortunately quite common so we see them all the time.

We get multiple birds on the suet balls all the time. They seem perfectly happy to share, as long as no one is being crowded. Only the starlings habitually squabble over them.

It's not gutted -- but there are ashes and soot everywhere. It looks like a small fire that was extinguished before it could become a big fire.

I am continually frustrated by local news stories here -- I read them and still have all sorts of questions by the end. As Tasker said, I think the papers are sometimes intentionally vague for legal reasons, but other times it seems like sheer laziness and it makes me crazy.

Oh, yes, I've seen pileated woodpeckers in Florida. In fact I think there's a picture of one on this blog somewhere!

We know there was a fire SOMEWHERE but that's about it.

Well, anyone who's not a pedestrian would be in or on a vehicle, so that's a frightening thought! LOL

Did you check Twitter? I sometimes find information there because people will tweet about incidents they see or hear.

She's becoming so stubborn about walking in damp conditions. And then we go to the Heath and she leaps into puddles!

GROAN -- I knew someone would go there. LOL

As she gets older she gets much more particular.

They're BIG! Surprisingly so!