A Wintry Blast from the Past

I hope you're getting the full effect of this photo. Why is snow falling in the train station, you may ask? I have no idea. Google made it happen.

I found this image when I was having trouble posting pictures a few days ago. Usually, when I click on the photo upload icon at the top of my post, I choose "upload from computer" and that's that. But because that option wasn't working I explored the other choices, one of which was "photos," which connects with something called "Google photos." There were only a few pictures there, but this was one of them.

I took this picture of Dave and Olga in the Liverpool Street train station on Dec. 23, 2013. I even blogged it at the time (without the snowflake effect). I don't know how it wound up in my "Google photos," whatever those are, or how the snow came to be added. I remember another blogger around that time posting a similarly embellished image and saying that Google had added the snow -- which he wasn't all that thrilled about. I kind of like it, though, even if it makes no sense inside a train station. 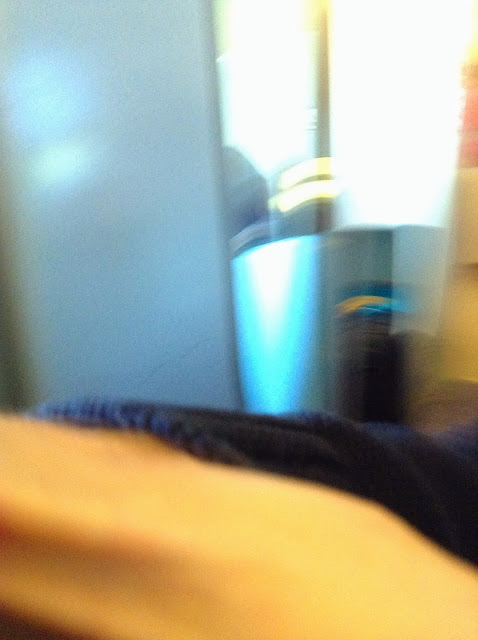 This was also in my Google photos. I don't know what it shows or where it was taken, but that navy blue rumpled thing looks like a sweater I own, and the bit of purple on the floor could be our living room rug.

Will the Internet ever stop surprising me? Probably not.

Yesterday was pretty quiet. Dave had a performance at school -- the high school winter concert -- so he was gone most of the day. I normally attend the high school concert too, but I wasn't crazy about sitting in an enclosed auditorium with a couple hundred other people. (They were all masked and allegedly lateral-flow tested, but still.) So I stayed home.

I hibernated on the couch, reading "Shen of the Sea," a Newbery winner from 1926. Like "Tales of Silver Lands," it's a collection of stories, and I'd say it's better than "Tales" but not great. I also cleaned more windows, this time in the living room. I'd like to clean the glass around the back door but there are just too many plants in the way. I'll have to wait until spring when I can move them onto the patio.

I tried to take Olga for a walk, but it was gray and wet outside, and she only wanted to go around the corner. Then she was ready to come home. I'd hoped to walk another segment of the Green Chain but the weather nixed that idea.

Last night Dave and I watched a documentary called "Jawline," which I saw recommended in the Times. (Here's the trailer.) It's a look at the world of online teen "influencers," centered on a young guy in Tennessee who was determined to make himself a household name. I found it interesting, but somewhat bleak. It's so bizarre that there's an entire youth culture built around becoming famous for doing basically nothing -- just posting pictures and collecting "likes." And yet these guys "go on tour" and attract crowds of screaming girls. And sure, they're cute, but not really any cuter than your average cute guy in your average high school. It all seems very mysterious and transient and empty.
Posted by Steve Reed at 6:45 AM