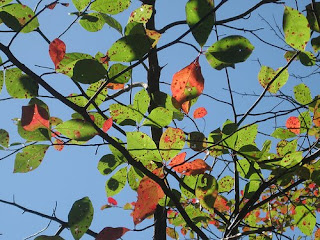 Dave and I spent yesterday at Cheesequake State Park, just a few miles from his apartment in New Jersey. Its name apparently derives from a Lenape Indian word meaning "place where people make cheese during earthquakes."

Oh, sorry -- it actually comes from Cheseh-oh-ke, which really IS a Lenape word meaning "upland" or "upland village." At least, according to Wikipedia, which as we all know is never wrong.

Anyway, it's a beautiful park, filled with woodlands, low-lying swamps, a lake and lots of hills and trails. We brought the dogs with us to give them a day outside, and since they're getting up in years, we chose the shortest possible trail to hike. Even that nearly wiped them out.

As you can see above, the leaves along some parts of the trail -- especially in the low-lying swamps -- were already beginning to change. 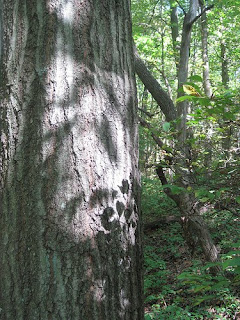 We went to Wegman's first and packed a picnic lunch with a baguette, some interesting cheeses (an Italian one called Bel Paese and an English cheese similar to Stilton, but more orange -- can't remember the name), some pickled onions, some garlic-stuffed olives, some edamame hummus and clementines for dessert. We thought about trying to bring some wine, but they don't allow alcohol in the park. Oh well. 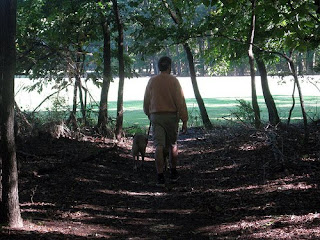