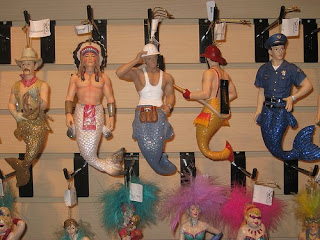 Yesterday I went walking in Old Montreal with my friends Bill and Jay. We stumbled across a store specializing in Christmas ornaments, a place I would normally avoid like the plague -- I am not a fan of Too Much Christmas. But Jay wanted to go in, so we checked it out. And I was glad we did, because where else have I ever seen hunky mermen dressed like the Village People?

The older part of town was interesting -- there's an archaeological museum that takes visitors down several meters below the ground's surface, where the foundations of the old city are still visible. There's a movie on the history of the area that clarified some things for me (for example, the street outside our hotel is called Rue Jeanne-Mance -- it turns out Jeanne-Mance was a founder of Montreal). I was always fuzzy on the French & Indian Wars, and it covered those, too. And there were lots of interesting artifacts on display. 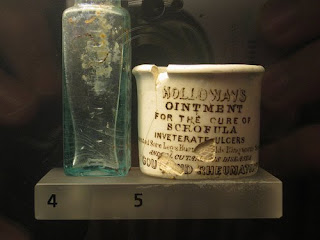 You gotta love this jar for ointment that cures "scrofula," whatever that is. There was also this interesting whistle: 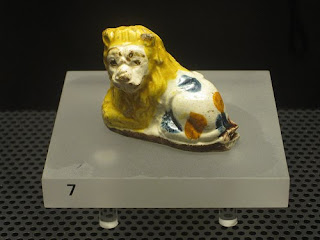 We had lunch in the historic area (fish & chips for me) and then, in the evening, the convention kicked off. This is the annual gathering of the National Lesbian & Gay Journalists Association, which I attend every few years. Last night was primarily social -- today we begin the real programming, including professional development sessions and panel discussions about issues as diverse as gay marriage and HIV coverage. Should be interesting!
Posted by Steve Reed at 12:41 PM