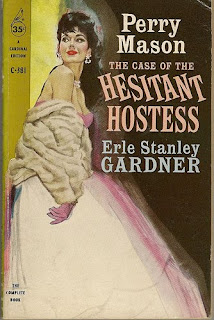 My grandparents had a weekend retreat in West Virginia that we always called Sleepy Creek, for the brushy rivulet that ran nearby. My grandfather used to periodically drive up there from Washington, D.C., to go hunting. Or so he said -- the family joke was that he seldom shot anything, and mostly stomped around the mountainside and sat inside the old farmhouse in the evening, reading cheap paperback mysteries.

After he died in 1977, my family went up to Sleepy Creek several times. On one of those trips in the 1980s I retrieved Grandfather's stash of Erle Stanley Gardner paperbacks. Gardner is best known as the creator of Perry Mason, surely the most famous lawyer on TV in the 1950s.

I read a lot of the novels, but I don't remember any of them. Grandfather didn't either -- he used to scrawl "read" on the title page so he'd be sure not to start the same one twice.

I kept the books in my own bookcase until I went to college, when I bequeathed them to my brother. Now they're stacked up at Mom's, on a shelf in the spare bedroom. Most of them are in pretty good condition, and many have "read" written inside them in my Grandfather's hand, and mine as well. (My mother wrote her first name when she read them, so sometimes she's there, too.) 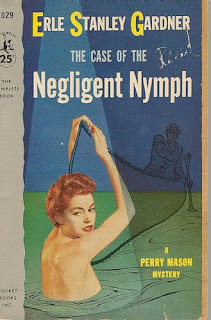 My favorite thing about the books is their mid-century cover art. This morning I scanned them all and put them up on Flickr. You can view a gallery of them here.

As for the West Virginia property, my family still owns it, but none of us have been there for years. We have caretakers keeping an eye on the place, so presumably the house, with its outhouse, wood stove and general lack of modern conveniences, is still standing. What we'll do with it is anyone's guess -- I suppose that depends on how we sort out ownership, which is now shared by my mom and my uncle, and will eventually pass to me, my brother and my three cousins. (We all hope it's not a family feud in the making!)
Posted by Steve Reed at 4:02 PM