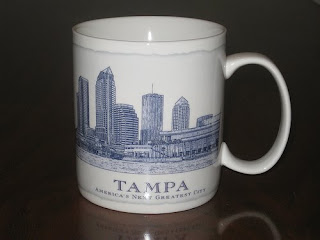 When I was down in Florida a couple of months ago, I bought two Starbucks mugs - one for me, one for Dave - featuring the skyline of Tampa, my hometown.

Beneath the skyline are words alleged to be the city's slogan: "America's Next Greatest City."

Back in the 1980s, Tampa adopted the slogan "America's Next Great City." It was widely mocked at the time, but it more or less stuck and was used for several years. Eventually, Tampa drifted away from that phrase, though - yesterday I checked both the city's Web site and that of the Chamber of Commerce, and could find no mention of it.

Somehow, in designing its Tampa mug, Starbucks turned "Great" into "Greatest," which makes the phrase seem even more flaccid than usual. "America's Next Greatest City" makes it sound like the runner-up. As in, not the greatest, but the next-greatest.

Mind you, I am not ridiculing Tampa here. I love Tampa and still think of it as home, despite the fact that I haven't lived there since 1992. I just think it's humorous that Starbucks bollixed the slogan - which probably illustrates why it wasn't such a great slogan in the first place.
Posted by Steve Reed at 11:40 AM