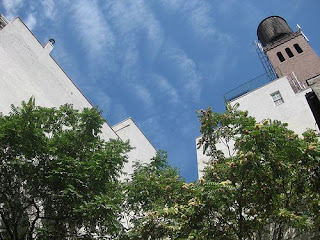 I am exhausted! Hosting family always wears me out -- even though they’re not staying with me, I wind up playing tour guide and doing things like getting them into cabs, going in the right direction. Whew!

We’ve done some fun stuff, though. On Friday we went down to Greenwich Village and walked around a bit. My stepmother, stepsister and nephew are visiting, and I showed them the site of the Stonewall riots of the ‘60s, as well as the neighborhoods around Christopher and Grove streets. Lots of quaint little houses and shops, although I forgot about the highly sexualized displays in some of those store windows -- my nephew is 11 -- oops!

Yesterday we went to a museum exhibit of relics from the Titanic, which was interesting. When you enter the show, you get a “boarding pass” and take on the identity of one of the passengers, and at the end you find out whether you lived or died. I was “Julius van der Planke” of Belgium, and I died, along with my wife, brother, sister-in-law and a family friend. The relics were fascinating -- money from the ship, paper documents, clothing -- it’s amazing what the cold, dark ocean preserves at that depth.

Last night we went to see “Hair,” and Dave joined us. It wasn’t quite as fun inside as it was outside in Central Park, but of course it’s still a great show. My stepsister and nephew left at intermission -- she’d seen the show before but I guess she forgot how mature some of the content was, and she felt like my nephew probably shouldn’t see it. I figure, what the heck -- if he hasn’t learned it from his classmates already he will soon enough!

Oh, and Dave didn't seem to hate it -- at least, not as much as I thought he might.