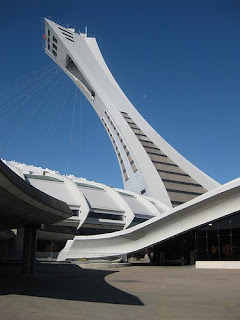 Yesterday my friend Bill and I went sightseeing. We took the subway to the Olympic Park where the summer games were held in 1976. I'm not much of a sports fan, so I wasn't hugely interested in seeing the stadium, the swimming facilities and all that stuff, but the complex is interesting architecturally. There's a huge slanted tower extending over the stadium, and it holds up the canvas roof via a system of cables. Pretty inventive! 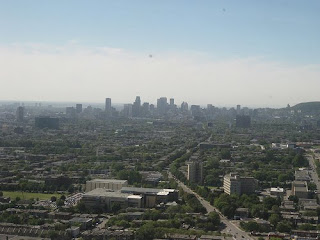 You can take a cable car up the tower for a spectacular view of Montreal and the surrounding countryside. 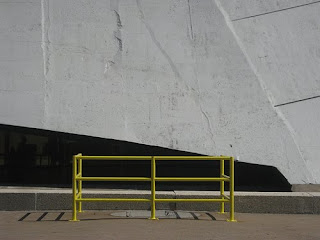 Afterwards I took a walk around the outside of the stadium and wandered over to the botanical garden and the "insectarium," which is exactly what it sounds like. Bugs galore, including scorpions -- aack! The gardens were shady and restful -- there's some kind of lantern festival going on in the Chinese section, so there are colorful lanterns suspended everywhere. The Japanese section, as you might expect, was restrained and minimal.

Today, more sightseeing, and then the journalism conference begins this evening.
Posted by Steve Reed at 2:21 PM