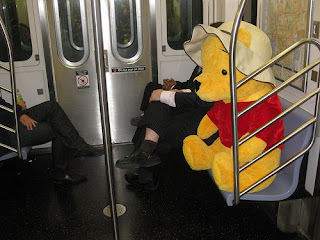 Last night was a bit of a blogging landmark here in New York, as we were graced with a visit by Pod of the recently expired blog "The Bad Photographer." Pod, you may or may not know, is from the Land Down Under, and for that reason some of us North American bloggers suspected we might never meet him in person. To do so was an unexpected pleasure.

Reya of "After the Gold Puppy" came up from DC, and the three of us went out to one of my favorite bars, Temple Bar on Lafayette Street, and then to dinner at a nearby vegetarian restaurant. We had a great time talking about the blogosphere and sharing stories.

One of the major themes was the energy of New York City -- the electricity, as Reya put it, that moves through everything here. It's what gives New York that sense of expectation, the feeling that anything could happen.

Perhaps the best manifestation of that feeling came after Pod left us at the subway and Reya and I boarded our train. We stepped into a car dominated by a huge, stuffed Winnie-the-Pooh, apparently being hauled homeward by a nondescript banker-type guy in a suit.

You just never know what you're going to see in New York!
Posted by Steve Reed at 4:21 PM