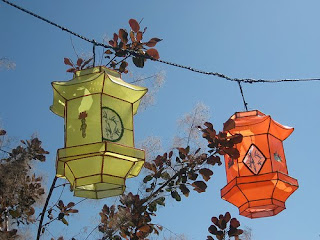 I’m writing this post on the train -- a new experience for me! I could get used to traveling with my computer. It’s been so convenient to upload pictures and write posts from the road.

Bill and I drove back from Montreal yesterday. Our trip was uneventful -- a little rainier than the drive up, but still scenic and borderline autumnal. In fact, the lowland maples seemed a bit redder than they were just a few days before, but maybe that was my imagination.

Food on the road is so horrible. I ate breakfast at McDonald’s in Plattsburgh, N.Y., where I saw a column in the local paper devoted entirely -- I am not making this up -- to the mallard duck. (It was called “Critter Corner,” or something like that.) I had lunch at a Roy Rogers. I feel like my bloodstream is full of emulsifiers.

I got back to Dave’s in mid-afternoon, but Dave wasn’t there yet, because he spent the weekend in South Carolina with his family. I did my laundry and watched “Midnight Express” with Brad Davis on DVD. I saw that movie on TV when I was a kid, in 1980 or so, and it made a huge impression -- it’s seriously homoerotic. Brad Davis stands around half the time in his briefs, and there’s even a men-kissing scene. How did that ever air on television without an outcry? (Or maybe there was an outcry, and I don’t remember it?)

Dave came home last night and we caught up on our weeks over Chinese takeout. Then we watched last week’s episode of “Hoarders,” which featured a young guy suicidal over the state of disorder in his life, and a woman who had 75 living and dead cats in her house. As much as I love that show, I do feel squeamish about watching such a spectacle, when those involved are so obviously miserable and mentally ill.

I’m going back to my apartment this morning and then zipping to work. A friend has been caring for Armenia, who will no doubt feign indifference at my return.