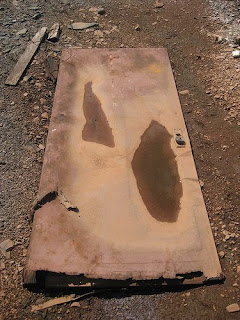 -- I just finished a terrific book: “The Unlikely Disciple: A Sinner’s Semester at America’s Holiest University,” by Kevin Roose. A student at Brown University, Roose spent a semester at Jerry Falwell’s Liberty University, in an attempt to better understand Evangelical Christians and their culture. He went undercover, and took classes just like any other Liberty student. It’s a fascinating book, and Roose writes really well (especially for a 19-year-old). It’s a page-turner!

-- Went to the grocery store last night (cashier’s name: Latorsha) and was once again appalled at the prices. Raisin bran is $6.69 per box; Progresso soup, $3.19 per can. Ah, Manhattan!

-- I tried to watch Derek Jarman’s movie “The Angelic Conversation” last night. I usually like films with an artistic bent, but I only got 18 minutes into this before I turned it off. There was no dialogue (only Judi Dench reading Shakespeare in stentorian tones) and lots of repetitive, annoyingly herky-jerky images that did not seem to say much. It’s possible to be too avant-garde, you know? I want that 18 minutes of my life back!

-- I switched to the very commercial “He’s Just Not That Into You,” which was OK, if somewhat depressing. I hope it wasn’t truthful about the straight dating scene. If so, people are vicious.

(Photo: Abandoned door outside a factory in Edison, N.J. Dave thought this door might make a good photo; I handed him the camera and said, “Take it!” So he did.)
Posted by Steve Reed at 12:58 PM