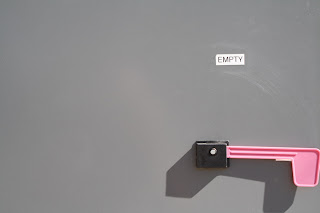 Yesterday, as I worked in my office on my normal Sunday shift, some folks were filming a movie around me! Apparently the newspaper agreed to let them use the newsroom as a set. So as I sat and tried to work -- typing up a story about a guy killed by a train -- I had to wonder whether my good side was facing the camera! (Not really. I don't have a good side.)

There were about ten other people there, appearing as extras and sitting at desks around me, and even more who seemed to have no on-camera role. I've always heard that movie-making, despite its glamorous reputation, is a pretty tedious business, and now I see what they mean. There's definitely a lot of sitting around and down-time between takes.

We'll see if this production ever gets any kind of commercial release. Regardless, it was kind of fun being in the background!