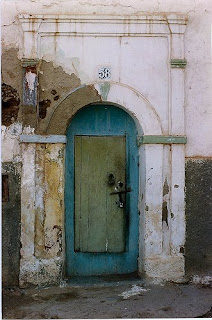 When I lived in Morocco, I took a weekend trip in February 1993 to a tiny community in the southwestern coast called Sidi Ifni. It was once a Spanish colony, and the center of town had a desolate colonial feel -- old Art Deco architecture and European-inspired parks. Spain ceded it to Morocco in 1969, and since then it's been mainly a fishing town.

I just recently rediscovered some of these photos, and a few I had reprinted from the negatives because the original prints had badly deteriorated. (African processing!) 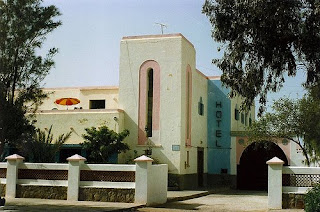 We stayed in this hotel, the Hotel Bellevue. You can barely see the heads of my friends, Kim and Jennifer, peeking over the top of the upstairs porch railing. 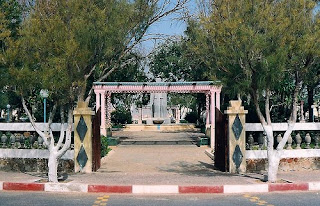 The park in the center of town was called the Plaza Espana. 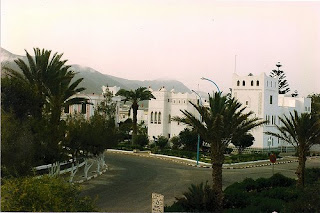 In the morning, the mist would roll down from the hills behind the town, giving everything a gray, foggy atmosphere. 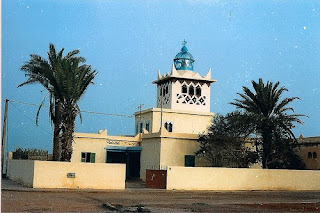 But soon the mist would burn off and the sky would turn bright blue. Here's the town lighthouse. 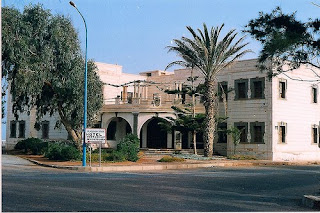 And here's the old Spanish consulate, which was shuttered and derelict. I saw on Flickr recently that it still looks like this, though that tree on the left has been cut down.

I found some great beach glass in Sidi Ifni, worn smooth and round. I still have a bowl of it. I was pretty fascinated by the place, though there wasn't much to do. Back in my stamp-collecting childhood, I had some stamps from Ifni, so it was amazing to be able to say later that I'd been there!
Posted by Steve Reed at 5:12 PM