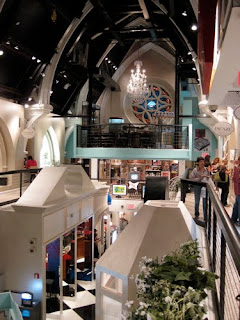 When I was in New York last week, I walked past the old church that once housed the infamous Limelight nightclub and was stunned to find that it had been turned into a mall.

The Limelight was a notorious disco and drug den in the 1990s, and was the hangout of Michael Alig and the Club Kids, who became better known for a grisly murder recounted in the film Party Monster. I have only a few personal connections to the place.

Once, in 1997 or so, I tried to go there with my friend Arthur. But we'd been walking around New York all day and we were wearing sneakers. As I recall, they turned us away at the velvet rope because our feet were not stylishly shod. 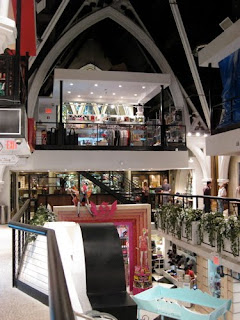 By the time I tried to go back, The Limelight was no more. It had become another nightclub called Avalon, and I went to a fundraiser for Howard Dean's presidential campaign there in 2003. I saw Gloria Gaynor perform "I Will Survive" beneath that peaked Episcopalian roof -- not to mention Howard himself and, I believe, Whoopi Goldberg.

Now, in what is surely another sign of New York's Disney-ization, it's a mall. And it's a schmantzy mall too, full of stuff like guest soaps and fragrances and scarves. Things, in short, that I would never buy.
Posted by Steve Reed at 4:57 PM