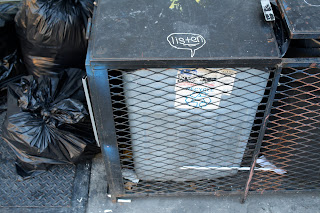 Ruby is famous! We nominated her for upsidedowndogs.com, a Web site we heard about several months ago on Graham Norton's BBC talk show. She loves to lie upside down, so I took an iPhone pic and sent it in. Then I forgot all about it until yesterday, when the site notified me that Ruby had been published. Pretty awesome! (Though she's not nearly as extreme as some.)

I wonder who makes money from all the advertising on that site? Whose pockets am I lining?

While walking Ruby and Ernie yesterday I found a note on the roadside that obviously had been lost or discarded by some school kid. For a glimpse into the mildly raunchy but mostly silly teen-aged psyche, check out "Things Waseem Can't Say." (And don't forget part 2!)

I had another library meeting last night. Ugh! Library overload!

(Photo: Listening to the garbage, on the Lower East Side, Monday.)
Posted by Steve Reed at 11:28 AM