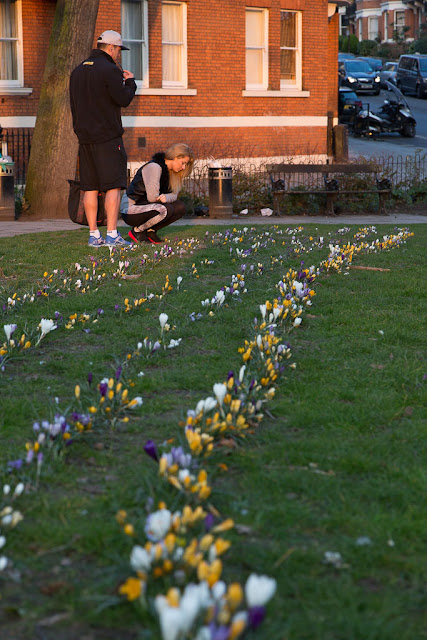 Someone planted these crocuses on West End Green, near our flat. They're a bit too regimented for my taste -- wouldn't they have looked better scattered randomly? But still, they brighten things up.

I take Olga to West End Green on many mornings before work. It's a tiny little triangle of a park, but enough for her to run around a bit. The downside is that someone -- a restaurant, or one of the bakeries -- discards their old bread there. They throw it out for the birds, and if I'm not careful it winds up in Olga. And it's always the oldest, moldiest, most craptastic bread possible. A few months ago she had a bonanza day when she found about 50 stale bagels lying in the grass. She downed two of them before I could get a hold of her.

When I lived in Morocco, the Moroccans had a thing about "respecting the bread." They would never throw old bread in the trash. Instead, they'd set it out in the street, on the theory that someone or something -- donkey, goat, dog, maybe even a hungry person -- would eat it. I suspect that's what's going on here, too.

There are signs in the park asking people not to feed the critters. But then, there are also signs telling people to keep their dog on a lead, and lots of people (ahem) violate that rule too. 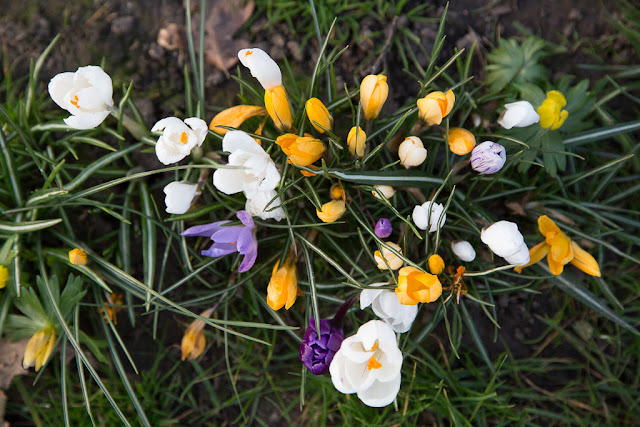 Anyway, I slept late this morning! But then I was up late last night, watching movies and reading. I watched "Midnight Cowboy," a perennial favorite, and finished the book I was reading, "Aristotle and Dante Discover the Secrets of the Universe," a good YA novel about two teenage boys coming of age and figuring things out -- but with a somewhat unlikely ending, I thought.

And have I done my French homework for class tomorrow? No.
Posted by Steve Reed at 7:16 AM