A Prideful Day Out 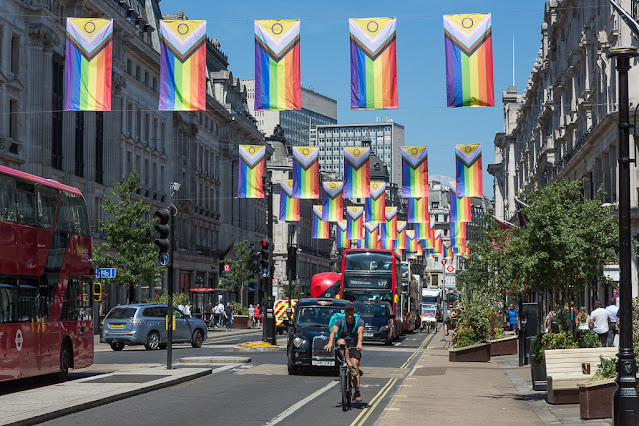 I took the tube into Westminster yesterday to run some errands, and I found that decorations are already up for Pride, even though the parade is still a little more than a week away. That's Regent Street above.

Dave and I wondered about this new Pride flag. See that little circle on the yellow field? Apparently that's a recent addition -- it stands for intersex. Even I, a member of the LGBTQIA+ club, must work to stay educated on these things. 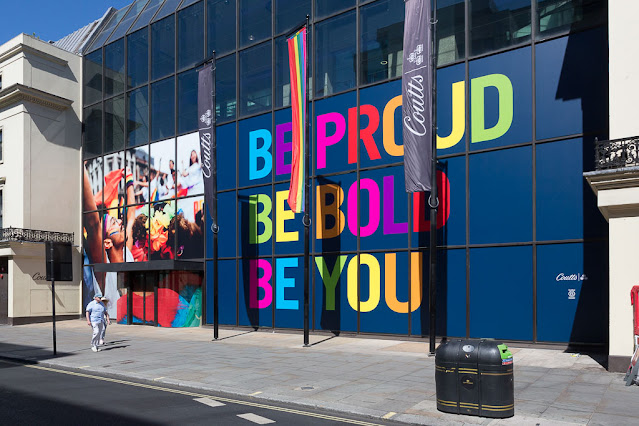 Coutts bank also got into the act in a big way, decorating the facade of their offices on the Strand.

One of my goals was to stop into Stanley Gibbons, the stamp dealer, and give them back the duplicates from that bag of stamps I bought several months ago. I had no use for all the extras and they could include them in other assortments. So I did that.

As long as I was in town, I decided to stop by Covent Garden market and see if I could find that guy who sold me the old photos a couple of months back. But he wasn't there -- I guess certain vendors are only there on certain days, or maybe only for a short time. I'm not sure how that works. In any case, no old photos were to be found yesterday. 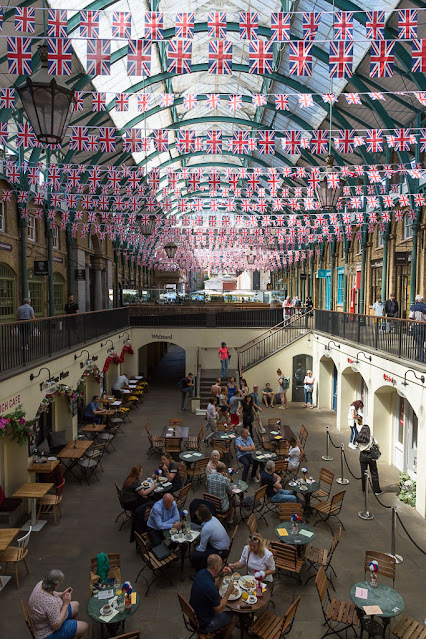 Covent Garden wasn't flying Pride flags -- not yet, anyway. I think they're still on the queen's jubilee.

I walked around that area for a while, then back through Soho and into Mayfair, taking photos and enjoying the amazing weather. 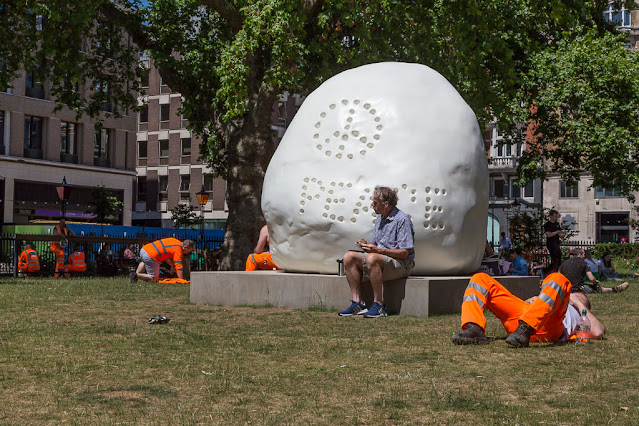 Eventually I stopped at Pret, bought lunch (a posh cheddar and pickle sandwich with Thai red curry soup, my usual) and ate it on the grass in Hanover Square, where Yoshitomo Nara's sculpture "Peace Head" is on display. (This is the back side; there's a face on the front.) The square was full of workmen on their lunch break, all wearing their bright orange safety gear. There's a lot of construction going on in that area and has been for as long as I can remember -- I think it partly has to do with Crossrail, the transportation project behind the new Elizabeth Line.

Anyway, after lunch I made my way home again. Dave and I spent much of the evening watering the garden, although apparently there's a chance we're going to get rain today. I'll believe it when I see it.

We've started a new show on the BBC called "Sherwood" that we're enjoying quite a bit -- another murder mystery. (Why are TV viewers so enthralled by murder and crime stories? I'm as guilty as everyone else. I guess killing someone is the most inherently dramatic thing one human can do to another!)
Posted by Steve Reed at 7:23 AM

Be Proud, Be Bold, Be You, I hope that is for everyone not just the gay people. It's a worthy message.
I've never seen so many flags up in one street before. And so many in Covent Garden too. Are there always that many or is that just for the Jubilee?

A bit of a gay outing for you. I didn't know of the new gay flag. I wonder if it will catch on.

I've seen Nara's works in northern Japan and Newcastle on Tyne. Good to see his work in London.

I try to avoid most dramas that involve killings and detective work but I am enjoying "Sherwood" with its echoes of the 1984-85 coal miner's strike. It is very well-constructed and has an accomplished cast.

The new pride flag is new to me, too. I'm glad we're starting to acknowledge more how people vary.

In the park with constructions workers.
It's like a Village people dream!

I love, love, LOVE all the pride flags. Now- if people would only show acceptance, respect, and appreciation all year long.

Looks like a fun day exploring and you got some great photos. Thanks for the intersex info - it is good to keep learning and accepting!

That sounds like an interesting day in the city. I love all the Pride flags and the Union Jacks too. That Thai red curry soup sounds delicious as long as it's not too hot.

What a lovely colorful day! So nice to see you out and about in the best city on earth IMO! British mysteries are the best, we can get a few on Amazon Prime and Britbox- rarely do they disappoint. Have a wonderful summer!

I play Yahtzee on my phone and all during Pride month they've had various "Pride Icons" themed dice available to win. One is called "Pride Flags" and the colors for each number represent a different flag in the LGBTQIA+ community. I had no idea there were specific flags in addition to a standard Pride flag!

Such a nice walk you had there. I love seeing those pride flags. Also really nice to see those construction workers resting at their lunch break. Nice sunny day for them.

The Pride flags look great! So colorful and festive. I have been to London three times, and I always enjoy going to Covent Garden. I bought a suitcase there once!

I like murder mysteries because they have built in drama, a generally tight plot and interesting characters. I get intimidated by the new longer groups of letters because I'm always afraid I'll leave one (or even more) out.

FREEDOM! Schools out. You covered a lot of territory in one day.

I have always loved mysteries, starting with the Nancy Drew books when I was a child. There is something so satisfying about solving the puzzle and seeing where all the clues finally fit in. Plus the mystery is always resolved and the guilty party is caught and justice prevails. Since life is a mystery it's a comfort to see that in the end it will all make sense.

Apparently there is an international women's day but I don't remember ever seeing it celebrated. I love the pride flags and painted crosswalks but I would like something that celebrates women too. And who decided March 8th was a good day for women? It should be in June or September, when the weather is nicer and kids are still in school. Perhaps I need to get involved in it for next year instead of moaning about it:)

I have a coworker with a transgender son and she keeps me up to day on the pride flag, although the circle is new to me. Have a lovely month and enjoy your time off.

Love all the pride flags! I was a rainbow collector when I was in high school & would probably have been mortified by what it stands for now (I was a good conservative Baptist girl back then). But it wasn't much after that when I changed my tune.

I'm mid way through a book about the royals, then I come here to see all this color. That lunch sounds good.

River: By all means, that message could (and should) apply to everyone! I'm not sure whether the Covent Garden flags are there all the time or not.

Andrew: Interesting. I didn't know Nara at all before seeing this piece.

YP: It is very well-constructed, I agree. I get frustrated by the characters' fixation on the past, though. I understand those miner's strikes were incredibly painful experiences, but it's discouraging that so many people would still be carrying those grudges and hostilities. (A bit like Northern Ireland!)

Boud: I agree! I find the gender and sexuality spectrum endlessly fascinating.

Ed: Q is queer, I is intersex, A is asexual, and + is everything and everyone else!

Ms Moon: Of course I agree and I think we're getting there. The younger generations are far less troubled by these issues. That's partly why the Religious Right gets so wound up about them -- they know in the long run that they're losing.

Ellen D: I agree. I'm learning new things all the time about the endless varieties of humanity!

Sharon: It's not too spicy at all. Next time you come to London you should try it. It's my favorite Pret soup!

Linda Sue: It WAS great to get out and see some sights. I feel like I've been hanging around the house a lot.

Kelly: There are LOTS of flags. I've seen them at past Pride parades, and I don't even know what many of them mean.

Robin: Yeah, they were definitely enjoying a sunbathing break!

Michael: Covent Garden is always interesting, but it's hit or miss with buying things. Sometimes they have great stuff and sometimes it's all cheap souvenir crap.

Margaret: People can be rather unforgiving sometimes about being overlooked but I think most of us are trying our best.

Red: Yes! I'm finally getting a chance to see some sights!

Lini: I used to read the Hardy Boys books obsessively, so I know exactly what you mean!

Pixie: Yeah, why isn't there a Women's Day parade? There was a huge parade initiated by women when Trump won the election -- remember the "pussy hats"?

Bug: Sometimes a rainbow is just a rainbow!

Mage: It's a colorful time of year in London!

I have that one on my watch list. Right now I'm watching something called "London Kills." Which is very good -- only two seasons so far so easy to do! There's something about a mystery! We feel good if we figure it out before the end (but not too much before, that's disappointing) and if we don't, a certain admiration for someone who can come up with those plots!